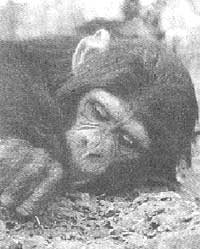 HOW did humans acquire intelligence? Two competing theories have attracted a lot of attention. One holds that the complex social relations among higher primates provided a key driving force; the other asserts that it was the complexities involved in obtaining food. Recent evidence indicates both pressures may have been equally responsible.

It is agreed that apes are much smarter than monkeys. Richard Byrne of the University of St Andrews in Scotland attributed this to the hurly-burly of their social life (Science, Vol 262, No 5139). But because the social life of monkeys was equally challenging, Byrne reasoned that there was something else that contributed to developing intelligence. Feeding complexity offered itself as an alternative when Byrne studied the eating habits of gorillas in Rwanda.

Byrne discovered that much of the diet of gorillas consists of plants with nettles, thistle spines or thick husks protecting the edible part. Eating these goodies often involves intricate procedures, such as peeling without getting hurt. Mastering these table manners provides a selective pressure that, along with social skills, could produce a more nimble mind.

Whatever the adaptive pressures on it, the primate mind does appear capable of remarkably advanced cognition. But not beyond a certain biological limit, as psychologist Sarah Boysen of Ohio State University discovered when she taught a number game to two chimpanzees, Sarah and Sheba.

She offered two plates to Sarah, one with seven gumdrops on it and the other with one. Sarah was supposed to indicate which plate she wanted Sheba to have. In theory, this would show that Sarah could count and reason that her counterpart should get the shorter tally. But in practice, greed clouded her reason: she always pointed to the plate with seven gumdrops. Then, when Boysen gave the chosen plate to Sheba, Sarah got upset. "It was the first task in 20 years I had failed to teach a chimpanzee," says Boysen.

But there change when the gum-drops were substituted with plastic number plates: the chimp would point to the lower number. When the gumdrops were put back, the chimps again had problems.

"The chimps understood the rule," Boysen says, "but they couldn't act on it" because of the biological imperative to get more food. Byrne says that the first humans transcended that limitation and before long, they developed rules for food sharing and other underpinnings of culture.