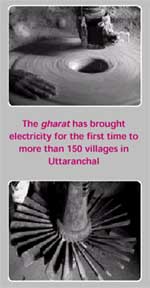 "The people's voice is water, water!" This is the chant of the water march, winding its way through the mountain villages of Uttaranchal, and opening the narrative of Gharat . This documentary focuses on the fate of the gharats--vertical axis waterwheels, which have been used by mountain communities across Northern India for centuries. For these villagers, gharats are a staple source of livelihood--they grind wheat, rice and maize and extract oil. Uttaranchal is home to 70,000 waterwheels. But as this documentary exposes, this way of life is under threat from big businesses upstream. Shots of crumbling gharats are liberally spliced with the macabre grinding wheels of corporate machinery.

There are also shots of dams that are slowly draining villages across northern India of their vital water supplies. Policy-makers argue that these would provide environment-friendly hydro-electricity to villagers. But the irony is that the supposed benefits of such electricity projects vastly outweigh their serious implications for villagers, many of whom are forcibly displaced to make way for the vast reservoirs. As well as draining gharats of crucial water flow and diminishing drinking water supplies, large hydro-electric plants upstream represent no source of energy for local villages.

"Water is converted into electricity for city-dwellers, whereas villages close to the hydro-electric projects are submerged in darkness," complains Anil Joshi, director of the Himalayan Environmental Studies and Conservation Organisation (hesco). Joshi's organisation works with villagers all over northern India to resurrect the gharat way of life.

The film explores the thorough apathy of policy-makers towards restoring the gharat and developing crucial forms of decentralised sustainable development. Upgraded gharats can turn a turbine to produce electricity at minimal cost. The performance of the waterwheels in the traditional task of grinding flour can also be optimised. But local government does not recognised this. Giant corporate projects are implemented with little regard for local peoples' livelihoods.

There is hope, however. The film follows the journey of one villager, who, with the help of hesco , revives his once crumbling gharat . His waterwheel not only grinds flour for the village, but also provides enough electricity to light up his small dwelling. There are other examples. For instance, P S Bhandari's upgraded gharat produces enough electricity for all 51 houses of his village, Dogwalla--each household is charged Rs 51 per month, far less than what would be demanded by large electric companies. Lal Singh's upgraded gharat in the same village now grinds over 80 kilogrammes of flour a day. In addition it provides electricity for his household--as well as for his three neighbours.

With hecos' help, over 150 villages across the Garhwal region of Uttaranchal have reinstituted gharats since 1989, bringing both grain milling facilities, and, for the first time, electricity to their mountain communities. Where big dams fail to provide electricity for the regions they dominate, gharat technology could, say hesco representatives, provide sufficient electricity for the entire Indian Himalayan belt.

The organisation has also started a watermillers' association and a gharat owners' association, which campaign for the protection of the gharat way of life and takes gharat issues to the doorstep of local government. The associations also campaigns for the inclusion of the waterwheel in state planning. "Empowering local communities with skill and knowledge so that they can make their presence felt at any forum is central to hescos's aims," says Joshi.

Gharat demonstrates that self-reliance at village levels can easily be developed. The film firmly expounds that a commitment to decentralised sustainable development is crucial in our world of diminishing energy supplies and corporate domination. It is about time that governments wake up to this need.