Where did leprosy originate?

Maybe in East Africa, but not in India, says a new study 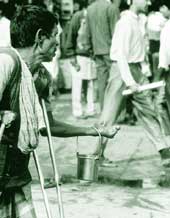 india might have the maximum number of leprosy-affected people in the world but a new study rejects the prevalent theory that the disease originated in India and spread to Europe through Alexander's troops. Researchers from the Institut Pasteur, Paris, France theorise that East Africa is the more likely place of origin of leprosy.

Further, these groups could be correlated with specific regions of origin -- type 1 occurs predominantly in Asia, the Pacific region and East Africa; type 2 in Ethiopia, Malawi, Nepal/ North India and New Caledonia; type 3 in Europe, North Africa and the Americas; and type 4 in West Africa and the Caribbean region. Though type 2 was found in North India, its presence was quite less as compared to type 1 -- the predominant variant for Asia.

The scientists found that type 2 was the rarest form of the bacterium. According to evolutionary sciences, the rarest forms of an organism are the oldest while the most common are also the most recent. They, therefore, contend this preceded the type 1 variety found in Asia, the Pacific region and East Africa, which migrated eastward. Similarly, type 2 preceded type 3 in Europe, North Africa, and the Americas, which spread westward. Type 4 in West Africa and the Caribbean region is the newest form of the leprosy bacterium.

The study also indicated that the disease did not travel directly from East Africa to West Africa where it was introduced by infected explorers, traders and colonialists of European or North African descent. From West Africa, leprosy spread through slaves to the Caribbean islands, Brazil and probably other parts of South America.

Also, colonialism and emigration from the old world introduced the disease to the new world. The greatest variety of the leprosy bacterium is found in islands such as the French West Indies and New Caledonia, reflecting the passage of and settlement by different human populations.

Experts feel that new understanding of the genetics of the pathogen would help the efforts towards the elimination of the scourge. The research also has relevance for tackling the disease. "As all the bacteria that cause leprosy have a ery similar genome, drugs and vaccines against the disease should work 'universally'," says Marc Monot, one of the researchers who carried out the study. Further studies need to be carried out to exactly determine the area of origin.