Where will the moolah come from? 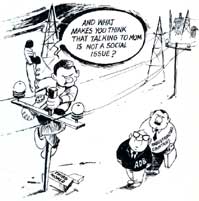 THE developed and the developing countries were locked in yet another standoff at the recent Asian Development Bank (ADB) meeting in Nice, France. At the heart of the dispute lay the insistence of industrialised countries, led by the US, that the ADB's capital increase be linked to a reorientation of the bank's lending policies. The ADB, they decreed, should focus on poverty alleviation, environment conservation, better appraisal methods and "good governance" by member countries.

This change of orientation is reflected in the recently-released ADB annual report for 1993. It says that 50 per cent of ADB's projects should have social objectives, instead of focusing on economic growth through infrastructure projects.

The West feels that as many Asian countries now have access to private capital, it makes more sense for ADB to act as a catalyst for social issues. A twist in the debate was added by William Ryrie, former head of the International Finance Corporation, the World Bank's private sector arm, who warned, "Too much official lending can retard the development of markets by thrusting capital into the system which is not subject to the same discipline of risk as the private capital."

The attempt to link the doubling of the Bank's capital to $46 billion to social issues was, however, opposed by the developing countries, who viewed it as interference in their affairs. The insistence of the developed countries particularly worried India because, since 1986, the ADB has loaned more than $5 billion for projects in the power, transport and telecommunications sectors.

The severest criticism came from China, which abstained from voting on the ADB's capital increase. "China does not agree with the linkage between policy and capital; they are totally different issues," asserted Zhou Zhenqing, a senior Chinese official.

The biggest fear of the developing nations is that the new conditionalities will hamper growth. They feel ADB loans should be channelised into infrastructural projects that fuel economic growth. According to them, another contentious clause is "good governance", which reeks of political meddling.

Besides, India and China have for years sought access to the Asian Development Fund, the ADB's soft loan window, to help them tackle social problems. However, despite the emphasis on social issues, it is uncertain whether they will get their way because the ADB maintains that it would put an enormous strain on resources.

The biggest challenge for ADB now is to successfully play two roles: to work as a catalyst for improving the lot of the 562 million poverty-stricken people in Asia, as well as to maintain infrastructural development at a level that does not bring economic growth in Asia to a premature halt.

Amongst all this gloom there is nevertheless one silver lining: an attitude of introspection prevails in the top echelons of the Bank. In an interview with the Asian Wall Street Journal, ADB president Mitsuo Sato said, "What needs to be really implemented is the real benefits of the project, for the people there. That, I think, is the really important change."