Wherever they may roam 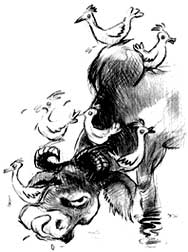 as long as those little, green men do not show up, the third stone from the sun - Earth - remains the only planet that can boast of life. In fact, life is in such abundance here that science can often lose track of all the various lifeforms that we share this planet with. Biologists speculate that right now, there may be as many as 10 to 30 million species of living organisms living under the same Sun with us. Sadly, of this huge biological wonderland, just about 1.5 million members are known to science. But thanks to the ever-present threats to natural habitats looming large and clear, we are witnessing an increasing realisation of the value of biodiversity. And today, there is an obvious interest in the question of when and how biologists describe new species.Can we learn anything from the history of species descriptions? For many groups, such a small percentage of the total fauna has been described that we may have to wait a long, long time before any lessons can be learnt from what has already gone on in the past.

Birds, however, are a different story. Nearly all the existing bird species are known to science, claim biologists. Some 9,000 to 10,000 of these are estimated to be present, of which most were described well before the beginning of this century, and these days, only two or three new species being discovered and described every year.

Many people have inferred from their common sense that while the large, conspicuous and relatively-widely distributed bird species get all the attention and are described early, the small, inconspicuous, narrowly-distributed and often-inaccessible bird species are often left out. They are usually discovered and described very late, a fact for which the apparent inaccessibility of these species must be blamed. This common-sense theory, however, has seldom been put to a rigorous test. But recently, T M Blackburn and K J Gaston from the uk performed an interesting statistical test of this widely-accepted theory.

Five hundred and thirty-nine species of oscine passerine birds (these are the perching birds like crows, thrushes and swallows) found extensively in South America were selected and the dates of the first description of each species were used as the dependent variable. The researchers explored the dependence on a variety of independent variables such as body size, geographical range, altitudinal range and abundance. The results proved that that geographical range is the strongest factor that decides when a species is described while body size was perhaps, the weakest. The other variables included in the test, such as altitudinal range and abundance, were of intermediate predictive value, claim the two researchers.

The duo made the reasonable assumption that an early date of description of a species reflects its probability of being discovered - higher the probability of being discovered, earlier would have been the description - and subsequently concluded that geographical range, rather than body size, abundance or altitudinal range is responsible for determining the probability of finding a new species. If this is also true for the animal species, then this test will have crucial implications for all future programmes of fauna survey meant to inventory animal diversity of a relatively unexplored territory.