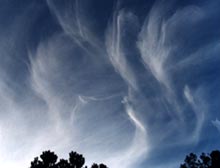 air pollution resulting from the burning of fossil fuels is reducing the formation of cirrus clouds, us researchers have found. Cirrus clouds -- the dappled clouds often seen on a clear day -- float at an altitude of 8-16 kilometres above the Earth's surface. At this height, temperatures can dip below -70c, and therefore the clouds comprise equal amounts of tiny suspended ice particles and water vapour. The researchers, from the University of Colorado, say this cloud chemistry has been disturbed due to the high levels of pollutants. "The clouds now contain more of water vapour, and hence are thinner than their pure counterparts," explains David Fahey, the lead researcher.

The thinning has an effect on the climate -- the cirrus clouds normally contribute to the greenhouse effect, says Damian Wilson, who studies cloud formation at the Hadley Centre for Climate Prediction and Research, uk. But thinner clouds might let more of the Sun's heat to escape back into space, which could help cool the planet.

Fahey, however, warns against reading too much into his results. He points out that his team has so far only taken a few samples of the clouds. "Researchers already have a hard time understanding the relationship between clouds and global warming. Our discovery simply adds another layer of complexity," he says.