Whither the new critical theory? 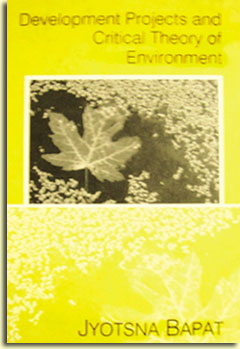 Why do communities resist developmental projects after they have begun? Why do so many of these resistance efforts have similar moral and ethical claims, despite the projects' different forms and locations? How should future environmental policies evolve? In this book under review, consultant Jyotsna Bapat ties-in these questions as she examines the impacts of development projects. She finds that planners often fail to consider tribal livelihoods and cultural imperatives in development projects, and that those meant to benefit most actually end up losing most from developmental projects.

All that is well known. The novelty of the book under review is that it promises to bring developmental projects under a new theory. This promise, however, remains unfulfilled. All that Bapat does is summarise two approaches, often used in development sociology: modernisation theories in their various avatars and dependency theories. She then writes, "There is need to creatively combine these two apparently disparate approaches." Weberian sociology, according to Bapat, fits this bill. Pray, what's so new about this?

Her repeated excursions into jargon mongering notwithstanding, Bapat is pretty lucid in her case studies. She looks at six infrastructure development projects that were meant to spur socio-economic growth in an underdeveloped region. These range from eco-tourism and amusement parks to power and mining projects, abatement of industrial pollution to urban transportation. The author locates each project in its social, institutional and historical contexts, and explains their outcomes as the consequence of the actions of various individuals and groups, each acting rationally to optimise their own interests. In the process she looks at interactions between project-affected persons, promoters of each project and government agencies.

Bapat is eminently qualified to undertake such studies. She has more than a decade-long experience as a consultant on impact assessment studies on social and environmental impacts of development projects. The book is the result of her tenure at the Department of Sociology, Macalester College, Minnesota, usa. B ut the author's credentials do not reflect on her work. The case studies do offer enormous scope for inter-disciplinary analyses, but the book disappoints us on that count. What emerges is a synoptic understanding of the various developmental issues studied by Bapat during her tenure as a consultant. She does acknowledge that the book is a result of 'retrospective analyses'. But, one fails to get any sense of her growth as a consultant.

However, Bapat's case studies are not without merit. She suggests that agencies regulating environmental impacts should adopt a "reconstructive adaptive" strategy aimed at improving the physical environment so that it is better than when the project began. Similarly, development projects should ensure that people affected by these projects should also be at least as well off as before the project started, especially in instances when their livelihoods are linked to environmental resources. The narratives produced in book are effective and evocative. But one fails to see anything new emerging out of them. One just can't find Bapat's 'critical theory of environment'. The account is in no way different than that of journalists working on the politics of environmental issues.

In fact, the garb of explaining the cases through theory only makes the case studies a tad unapproachable. The book would also have done with tighter editing. Many a time there's repetition of ideas in the same paragraph. Bapat appears like a pedantic professor repeating ideas through different statements.

The book leaves this reviewer with a curiousity. Has Bapat's foray into academics made any difference to her as a practicing consultant? How differently is the author dealing with the issues she has highlighted in the book?

Ritika Shrimali is a research fellow at the Department of Geography, Delhi School of Economics, University of Delhi