The death toll in four West African countries affected by the deadly virus has topped 1,000 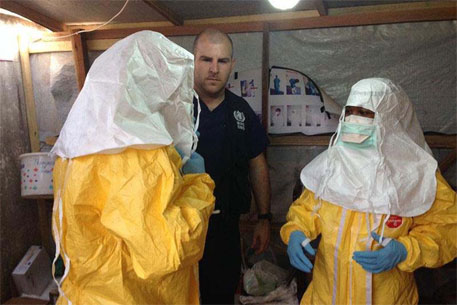 Amid the controversy over clinical trials of possible cure to Ebola, the World Health Organization (WHO) on Tuesday authorised the use of experimental drugs to fight Ebola. The experimental drug, named ZMapp, is a serum manufactured by Mapp Biopharmaceutical in San Diego and Defyrus Inc of Toronto, Canada.

“In the special circumstances of this Ebola outbreak it is ethical to offer unregistered interventions as potential treatments or prevention,” WHO assistant director general Marie-Paule Kieny said in Geneva, following a meeting of medical experts on the issue.

The death toll in four West African countries affected by the deadly virus has topped 1,000. Days before, on August 12, an elderly Spanish priest has become the first European to die from the outbreak on August 12 after succumbing to the virus in a Madrid hospital. This happened five days after he was evacuated from Liberia.

In another development after the WHO said that it was ethical to use untested drugs on Ebola patients, Canada has said it would donate up to 1,000 doses of an experimental Ebola vaccine to help battle the outbreak in West Africa. It, however, would keep a small portion of the vaccine for research, and in case it is needed in Canada.

The international health agency has also warned that there is "no early end in sight" to the severe health crisis and called for "extraordinary measures" to stop the transmission of the disease. According to the latest update issued by WHO, 128 new cases of Ebola virus disease, as well as 56 deaths, were reported from Guinea, Liberia, Nigeria, and Sierra Leone between August 10 and 11, bringing the total number of cases to 1,975 and deaths to 1,069.