WHO bans smoking in indoor workplaces 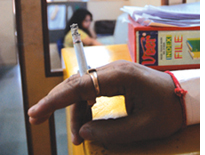 In a firm step towards checking tobacco use, on May 29 the who issued its strongest policy recommendations. It urged all countries to ban smoking at indoor workplaces and public buildings. It asked governments to immediately pass laws requiring all indoor workplaces and public places to be 100 per cent smoke-free and also to strictly enforce the laws. These recommendations were made on the basis of "indisputable" scientific evidence, says who. "The evidence is clear. There is no safe level of exposure to second hand tobacco smoke," said Margaret Chan, director-general, who.

who said that tobacco use was the world's leading cause of preventable death, accounting for 10 per cent of adult fatalities. It is responsible for 5.4 million deaths each year, a figure that is expected to rise to 8.3 million by 2030.The International Labour Organization says that around 200,000 workers die each year due to exposure to smoke at their offices and factories. Many non-smokers will also die unless governments take action, added the report.