WHO issues guidelines to improve quality of air

In October 2006, the World Health Organisation (who) released new guidelines challenging governments around the world to improve air quality in their cities. The recommended limits of pm10, ozone and sulphur dioxide have been substantial lowered. The prescribed standards are far tougher than the those in vogue in many parts of the world, and who believes that their adherence would improve public health substantially. The standards have another significance who's earlier guidelines were meant only for Europe, but the new guidelines have been recommended for worldwide application.

According to who, the new guidelines were set after a worldwide consultation with more than 80 leading scientists and are based on review of thousands of recent studies from all regions of the world. who has estimated that air pollution causes approximately 2 million premature deaths worldwide every year. It estimates that more than half of this burden is borne by people in developing countries.

The following are other highlights of the new guidelines

• The daily limit for ozone has been reduced from 120 down micrograms per metre to 100 micrograms per cubic metre. This is a stiff challenge for cities where due to higher number of sunny days there are high ozone concentrations and consequently more cases of respiratory problems.

• For sulphur dioxide, the guideline level has been reduced from 125 to 20 micrograms per cubic metre. 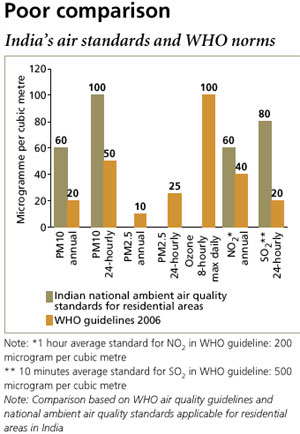 who now looks forward to working with all countries to ensure these guidelines become part of national laws. While the world body accepts the need for governments to set national standards according to their own circumstances, these guidelines indicate levels of pollution at which the risk to health is minimal. According to Michal Krzyzanowski, regional adviser for air quality of the who's regional office for Europe, "who has set new targets which member states can refer to in setting policy. The countries can measure their distance to these objectives, estimate the health impact of current pollution levels and reduce disease."