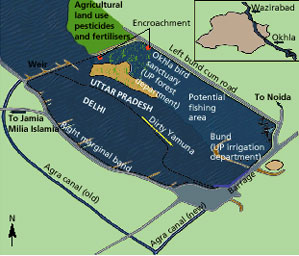 on february 4, 2006 bird carcasses were spotted in the Okhla bird sanctuary in Gautam Buddh Nagar, Uttar Pradesh (up). In the next three days, 58 bird deaths were reported in the sanctuary. Though the exact cause of the calamity has not yet been confirmed, bird lovers and forest officials suspect the birds were poisoned. Their suspicions were strengthened when three people were apprehended in the sanctuary on February 8, 2006 with poisoned wheat, hooks and other fishing paraphernalia.

The Okhla bird sanctuary covers a 3.5 sq km stretch of the river Yamuna, bordering New Delhi and up. It was declared a sanctuary in 1990. But water birds don't seem to be safe in what was earlier a haven for them. On February 4, 2006 Anand Arya, a member of the Delhi Bird Group noticed dead birds in the sanctuary and reported the matter to the Wildlife sos , a Delhi-based ngo working on wildlife issues. The carcasses were sent for post-mortem.

P Prabhakaran, a veterinary surgeon who conducted autopsies on the dead birds says, "Though the sanctuary has many types of birds, carcasses of only piscivorous (fish eating) species were found." He adds, "The internal organs of the birds were intact and fish just swallowed was found in their digestive tracts. These indicate sudden poisoning due to contamination." Prabhakaran rules out bird flu, contending that the disease would have taken a far greater toll. "Only a fraction of the more than 20,000 water fowls in the sanctuary were affected," he remarks. But the authorities and bird lovers are taking no chances: the samples have been sent to Indian Veterinary Research Institute at Bareilly, up and the Bird Flu Laboratory at Bhopal, Madhya Pradesh.

Meanwhile, a fresh controversy erupted after three men were caught fishing in the sanctuary on February 8, 2006. " Kanhaya Lal, assistant warden, up forest department says, "Though fishing is banned in the sanctuary, villagers do sneak in." Sunder adds, "Fisherfolks here use chemicals and dyes to kill fish; the poison is quite likely to harm piscivorous birds as well."

The villagers refute this charge and complain that, "The deaths have become another pretext to harass us." Some do admit, on conditions of anonymity, that they fish in the sanctuary simply because "other parts of the Yamuna are too polluted, except during monsoons". But they are quick to add that they have not fished in the sanctuary after the bird deaths. And then one of them mentions in a hushed tone, "A contractor asked us to go to the sanctuary to catch fish on February 7, 2006. But he called us back just as we were about to enter the reserve, since he had received information about officials patrolling the area."

The sanctuary's banks have become a dump for various types of wastes, including idols and colours used for religious purposes. The Shahdara drain, Delhi's second most polluting drain, flows metres away from the reserve, bringing waste from East Delhi to the Yamuna. Not surprisingly, many such as Louis of Wildlife sos, say, "The water at the sanctuary is very polluted." He also rues that, "we do not know the contaminants' exact nature." Neither the Central Pollution Control Board nor the Delhi Pollution Control Committee -- supposed to monitor water quality -- have responded to the bird deaths. And there is no programme to monitor the sanctuary's environment.

How could there be any such programme? The reserve's management is vexed up because different authorities are in charge of different functions that impinge on the Okhla bird sanctuary: the forest department is its caretaker, the up irrigation department owns the land adjoining the waterbody and the Delhi government is in charge of the territory through which the polluted river flows (see map). The ill-staffed forest department finds it difficult to check the many violations.

The area in the sanctuary's vicinity is a site for floodplain agriculture. So, pesticides getting into the waterbody can't be ruled out. For any realistic answers, the investigators will have to look at the river basin, not just the spot.

With inputs from Bharat Lal Seth