Who rules your world? 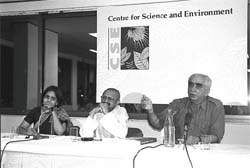 "There is a need to realise that ecological neglect is a weapon of mass destruction," said Jaswant Singh, Union minister of external affairs, during a discussion organised by the Centre for Science and Environment (CSE), a New Delhi-based non-governmental organisation.

The discussion focused on the low level of environmental awareness in developing countries and the widening North-South chasm. Based on the findings of Green Politics: Global Environment Negotiations-1 , a CSE publication, Anil Agarwal, director of CSE, made a presentation. The book has received worldwide acclaim for giving a clear perspective of how lives of people in developing countries are affected as a result of decisions taken at the global level. "Start participating and be proactive so that we can build a good leadership in the world," Agarwal urged Singh. "Civil society participation from the South is the need of the hour," added Sunita Narain, deputy director, CSE.

"The underlying reality is that environmental issues have no political sex appeal in this country. As a result, environmental issues do not become election issues," Singh said. Stating that 80 per cent of India's population constitute the rural sector, he mentioned the need for public participation. "We cannot afford to make environment and ecology an elitist issue," he added.