Who will save the fish? 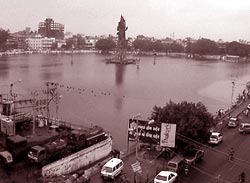 three truckloads of dead fish were found in the famous Sursagar Lake, in Vadodara, Gujarat, during a cleaning operation from September 18 to October 10, 2004. On October 11, 2004, about two truckloads of dead fish were removed from Ahmedabad's Kankaria Lake. These incidents once again brought to light the gross neglect of urban lakes in India, typically due to official insensitivity.

The cleaning drive of the Sursagar Lake or Chandan Talao was undertaken by an nri entrepreneur, Bhavesh Patel, with the permission of the Vadodara Municipal Corporation (vmc) . It was initially feared that the fish had died during the clean-up, so the vmc halted the operation midway. But a few days later, the vmc and the Ahmedabad Municipal Corporation declared that the large-scale death was caused by the plaster of paris used in the idols of gods and goddesses that had been immersed in the lakes. The plaster of paris further reduced dissolved oxygen level in the already contaminated lakes. Other experts believe that excess deposits of dye pigments, lead, and other chemicals also caused the fish to die.

Despite the acknowledged harmful effect of idol immersion, the vmc acts as a facilitator of the activity. Vadodara mayor V N Patel says a "total ban on idol immersion is not possible". The lake also serves as a dump for organic waste from several food kiosks and a temple in its vicinity.

The fish deaths revealed another gap in the lake's management. All the dead fish were of a single species, Tilapia, which is banned in the state's ponds and lakes under the Fisheries Act, implemented last year . Tilapia is carnivorous and kills less aggressive fish varieties. S M Patel, assistant superintendent of the fisheries department, cannot explain its massive presence in the lake. The Gujarat Pollution Control Board's (gpcb) regional office, which is responsible for monitoring Sursagar's health, is clueless about the goings-on at the lake. "The vmc is looking after the lake's maintenance. We are not directly involved in its day-to-day matters," says S N Jha, gpcb regional officer. It is perhaps the hope of voluntary help like Bhavesh Patel's that makes V N Patel confident: " vmc is determined to clean Sursagar. Once this is done, we won't allow any dumping into the lake." Otherwise, the vmc doesn't even have enough funds to remove the garbage near the lake, a vmc engineer claims.