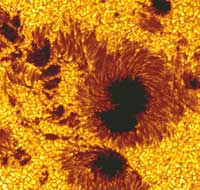 Two climate change sceptics have put their money where their mouth is, and bet us $10,000 that the planet will cool over the next decade.

The pair believe that global temperatures are driven more by changes in the sun's activity than by the emission of greenhouse gases. They say the Earth warms and cools in response to changes in the number and size of sunspots. Most scientists dismiss their theory, but as the sun is expected to enter a less active phase over the next few decades the Russian duo are confident they will see a drop in global temperatures. Annan, who works on the Japanese Earth Simulator supercomputer, in Yokohama, Japan, said: "There isn't much money in climate science and I'm still looking for that gold watch at retirement. A pay-off would be a nice top-up to my pension".