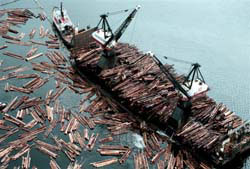 In a strange twist to the raging lumber dispute between the us and Canada, both nations have interpreted a recent World Trade Organisation (wto) ruling on the issue as a vindication of their respective stands. While the us contends that it has scored a "technical point", Canada says the body has ruled against the heavy levies the us has imposed on its lumber. For both sides, celebrations may be premature since the wto is yet to make its observations public.

John Ragosta, a lawyer for the Coalition for Fair Lumber Imports, a us industry group, points out that by categorising timber as a good the wto has supported the us charge that Canada is subsidising its lumber produce. Canada had maintained that timber is a natural resource and, therefore, the low stumpage fees paid by the industry to the government cannot be treated as subsidies. On its part Canada, too, is claiming victory. The country's officials state that the wto panel has agreed with its claim on stumpage fees. The wto has also questioned the us commerce department's methods of calculating countervailing duties, they add.

The us has been accusing Canada of exporting illegally subsidised timber at prices below market value, thus affecting its domestic timber market. It had slapped an 18.79 per cent average countervailing duty and an 8.43 per cent anti-dumping duty on Canada's softwood lumber recently.

The matter will be resolved only if the wto goes public with its observations.