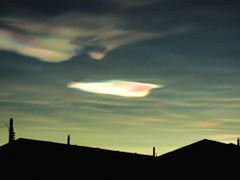 with the upper ranges of the Arctic atmosphere getting colder -- a predicted consequence of climate change -- the rate of ozone depletion would be three times greater than currently forecasted. These are the findings of researchers from Germany-based Alfred Wegener Institute for Polar and Marine Research. They studied climate conditions in the Arctic over 10 winters to calculate how ozone destruction depends on the weather. A strong relationship was found between ozone loss and the amount of clouds in polar stratosphere (upper layer of the atmosphere).

The polar stratospheric clouds form 20 kilometres above the Earth's surface during winters. They are often called 'mother-of-pearl' clouds because of their shimmering appearance. But they are not mere harmless things of beauty. The clouds provide reaction surfaces for chemicals eating away the Earth's protective ozone layer. Chemical reactions in the clouds convert chlorine (of harmful air pollutants like chlorofluorocarbons) into a reactive form that breaks apart the ozone molecules. Colder air in the upper layers of the atmosphere is thought to promote the formation of these clouds, and thereby the destruction of ozone.

The Wegener researchers found that winter conditions in Arctic are getting conducive for ozone destruction. The amount of stratospheric cloud of the region has increased steadily since the late 1960s, the researchers report in the Geophysical Research Letters (Vol 31, No 4, February 28, 2004).