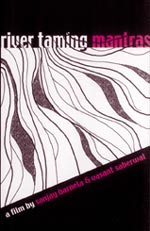 The 's' in River taming mantras is superfluous. The documentary centres round a single water taming mantra, the embankment, concentrating largely on its inefficacy in keeping at bay waters and woes alike. Bihar, a state 16 per cent of which remains waterlogged the year round is used as an apt case in point.

The first half of the film elaborates on the nuisance value of embankments notwithstanding the disorienting effect of the opening shot -- it shows a railway station in Bihar, and the camera lingers at length on the moving train, the people atop it, their views on the need to migrate to the metropolis -- on the viewer. The critique on embankments that follows is sound, but apart from the stray reference to the creation of wetlands no other viable solutions are proffered. Interestingly enough, it is a villager who draws attention to the fact that the embankments need sluice gates to combat waterlogging, a fact overlooked by grave officials who seem overwhelmed by the cost factor. The camera lingers on swollen rivers and waterlogged fields, frames that fail to enhance the narrative for obvious reasons. The second half, which explores the corruption that is an offshoot of flood relief, is more satisfactory.

Some of the post-flood images are, however, arresting in their poignancy. The film-makers have not tried to poeticise a people's tragedy, but merely captured the fragility of the human endeavour to score over nature. The house with the door ending abruptly mid-air, is a testimony of irreverent waters that disparage the sanctity of the threshold. But the most haunting image of all is the hut, half afloat, thieving waters engulfing it, silently mocking the sombre lock adorning its entrance.