Whose inflation is it anyway?

Government sat on grain stocks while food prices shot up 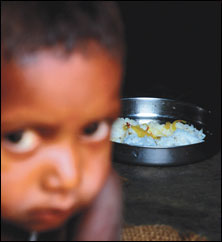 In july 2008, when inflation rose to a 10-year high of 11 per cent and industry was hit by a range of factors, including economic recession, the Union government responded immediately. There were day-on-day monetary interventions. Since July 2009, inflation, as calculated by the prices poor consumers pay for their daily needs, has hovered around 11 per cent, again a 10-year high. It took the government till October to respond—with offers to offload buffer stocks of foodgrains and promises of imports.


The government has shown more alacrity in responding to increase in the wpi, which is used to calculate national inflation.

“Up to 48 per cent of income is spent on purchasing food by the poor,” said Praveen Jha, associate professor of economics at Jawaharlal Nehru University in Delhi. “The prices reflected in the wpi are less than what is actually paid by the consumer.” While wholesale prices of food items increased by 13.31 per cent in October, the retail prices rose by 15.3 per cent.

India’s wpi -based inflation increased by 4.78 per cent in November and food inflation soared to a decade’s high of 19.95 per cent for the week ended December 5. This was attributed to rising prices of essential food items like rice, wheat, vegetables and pulses. Economists suggest that with wholesale prices of food rising by about 20 per cent in December, consumers would be more adversely affected.

Prices of food items are rising because of a combination of factors. A section of economists believes speculation and hoarding are the most probable causes because there has not been a significant decline in grain production or spike in demand. Decline in foodgrain production due to bad monsoon would put more pressure on prices in the coming months, while prices have been rising since 2007. Demand is definitely not a factor behind price rise as people’s income has been more or less flat, Jha said.

“The prices zoomed in 2008 despite it being a bumper production year. The trend continued in 2009,” Jha said. “One important factor behind price rise is speculation as many big economic players got into food economy to make fast profits when there was a crash in the financial market,” he added.

The other bottleneck is hoarding. “Inflation in the past six months has largely been on account of sugar, pulses, rice, wheat and vegetables. The government procured large amounts of staples like rice and wheat but has not released them to consumers,” said Himanshu, assistant professor at Jawaharlal Nehru University. “The government has become the biggest hoarder.”

The government has been accumulating surplus wheat since 2008, pointed out Ramesh Chand, National professor at the National Centre for Agricultural Economics and Policy in Delhi. Had it begun releasing the stock in the market earlier inflation could have been contained. But the government announced its plans to offload three million tonnes of wheat and rice on October 6.

Hoarding has been recognized as a reason behind food price inflation and a parliamentary panel suggested amending the Essential Commodities Act to check hoarding and speculation. The official response to hoarding has, however, been that of passing the buck. Decisions to curb black marketing can be implemented by the states, food and agriculture minister Sharad Pawar told the Lok Sabha on November 26.