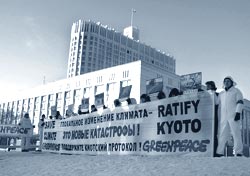 russia has refused to toe the us line on Kyoto Protocol -- the international agreement to control greenhouse gas (ghg) emissions. A us delegation was in Russia recently to explore possible common approaches to address climate change. But experts feel that the real purpose of the visit was to influence Russia's position on Kyoto ratification.

Though Russia has not yet given the long-awaited green light to the Kyoto pact, it is very much inclined to do so. At a joint press conference with the us delegation, A I Bedritsky, head of the Federal Service of Russia for Hydrometeorology and Environmental Monitoring, is reported to have said: "Russia is moving towards ratification and routine paperwork should be completed in a month."

Procedural wrangles seem the cause of delay. "It's a pity, but paperwork in the government is the main problem," laments Alexey Kokorin, coordinator, climate change programme of the World Wide Fund for Nature (wwf), Russia. Kokorin cites a recent example: "A set of papers was rejected by deputy prime minister Victor Christenko on January 15, 2003, because of the absence of adequate proposals on the Russian domestic legislation on Kyoto."

The recent release of a draft report of the International Project on Global Environmental Change (Threat to Food and Water Security in Russia) could provide the much-needed impetus to accelerate the ratification process. The report refutes the popular belief that climate change will largely benefit Russian agriculture and water resources. Instead, according to the report, droughts will become more frequent in key areas of the country and this will threaten food and water security.

Meanwhile, European non-governmental organisations are pressurising their respective governments to urge Russia to hasten the process. "The timing is critical. If ratification is not done by the spring session of Duma, then it will most likely be put off by at least a year due to the upcoming Duma elections this autumn and presidential elections in March 2004," wrote the wwf and global pressure group Greenpeace in a letter to eu heads of states.