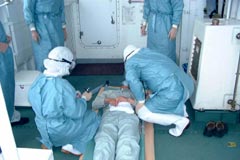 the first round of consultations, aimed at revising the International Health Regulations (ihr) of the World Health Organization (who), was held in Manila in the Philippines on April 28. Under the ihr, it is currently mandatory for member countries to report the occurrence of three infectious diseases -- cholera, plague and yellow fever -- to ensure that they do not spread to other countries. The decision to revise the rules was taken in order to curb the incidence of other emerging and recurring diseases like the Ebola haemorrhagic fever, severe acute respiratory syndrome (sars) and avian influenza.

According to experts, had the 35-year-old set of rules been modified earlier, it would have been necessary for China to report the sars epidemic to the who. And this would have prevented its spread to other countries. The revision work has been going on since 1995. Consultations would now take place at other regional offices of the who. Following this, an intergovernmental working group would prepare a final draft. This will be presented to the World Health Assembly in 2005.

A draft document of the regulations, along with the changes proposed to date, already exists. If its provisions are accepted, the new rules would also provide protection against harm by deliberate use of biological or chemical agents. Besides, a nodal agency would be set up in each country to help build capacity to quickly report, assess and respond to public health crises. who would have continuous access to this agency.