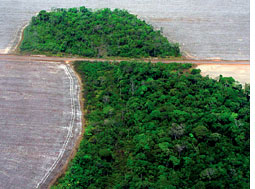 a popular solution offered to make wildlife migration easy is to develop strips that connects two forest fragments. These are called corridors. While their importance is beyond dispute, their size isn't. A recent research looked into 32 corridors in Southern Amazonia and said they are not "wide enough" for mammals and birds. The corridors in the Mato Grosso area, a popular eco-tourist destination in Brazil, range between 10 m and 50 m. The researchers say a corridor width of 400 m and more will benefit mammals such as jaguars and birds like trogons in the areas.The forests here are fragmented by increasing urbanization and agricultural practices.

The study carried out at University of East Anglia, uk, said wider corridors would have greater species diversity. Besides providing "good quality habitat for animals", there is less intrusion in terms of grazing and human movement. They also offer more food options as there is more variation in plant varieties. These factors lead to species using corridors regularly, the researchers say in the paper that will be published in the March 2008 issue of Conservation Biology.

Earlier studies in the us and Australia projected an optimum corridor width of 350 m, which takes into account several of the species requirements, including food and habitat, nearby disturbances, vegetation structure required and the purpose the corridor is to serve. But the present study indicated that large animals need wider corridors since they require larger habitats to find food.

In India, only elephant corridors are talked about. But is width an issue? "Corridor width is important and obviously wider a corridor, the better it is; but in my experience, the disturbance factor is more important for elephants. It is not always possible to create a wide corridor, but if we can minimize disturbances elephants will use such areas," says Samir Sinha of traffic India, an organization that monitors trade in endangered species.

But there is little information on width in the elephant corridors chalked out throughout the country. India is said to have half of the world's population of elephants, which are found in 110,000 sq km of forests, across 11 elephant reserves. Eighty-eight potential corridors have been identified based on ecological priority, which was evaluated against regularity of elephant movement, population, size of habitats being connected and alternative routes.

Wildlife experts stress corridor management. "Corridor width depends on the kind of species using the corridor. For elephants, if a corridor is too narrow they will tend to wander into human settlements in search of food. Our understanding of corridors is poor. We need to look more at management," says Sujoy Banerjee, director, species conservation division at World Wide Fund for Nature, India.