Good while it lasted - II: 6th mass extinction an all pervasive loss

The loss of biodiversity is on land, water and air, across all continents, and indicates mass extinction 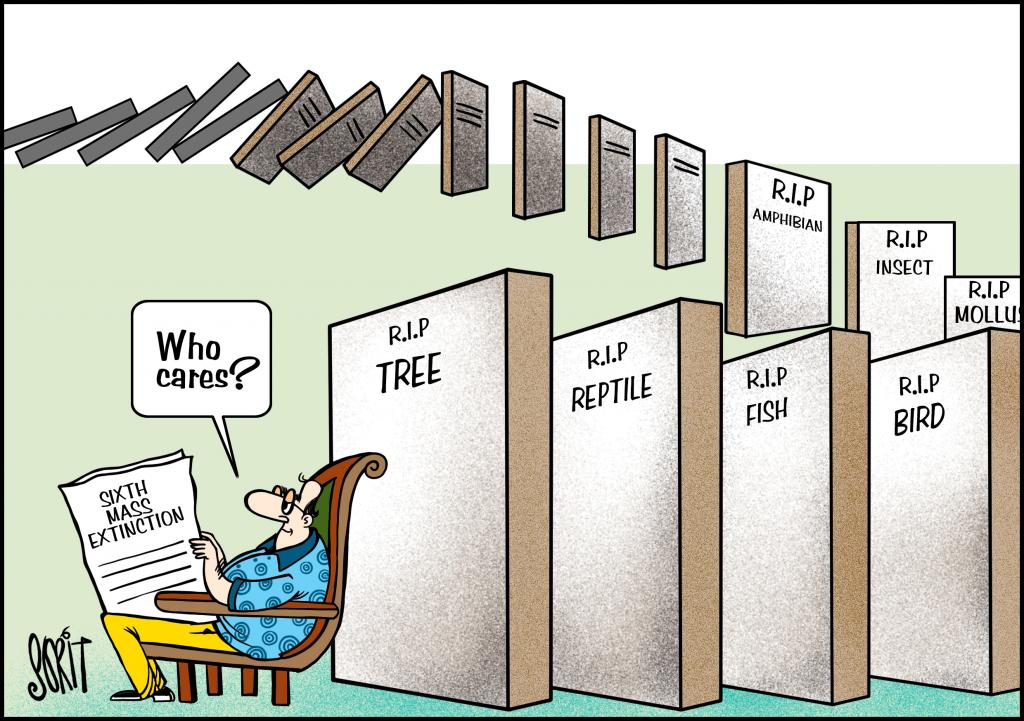 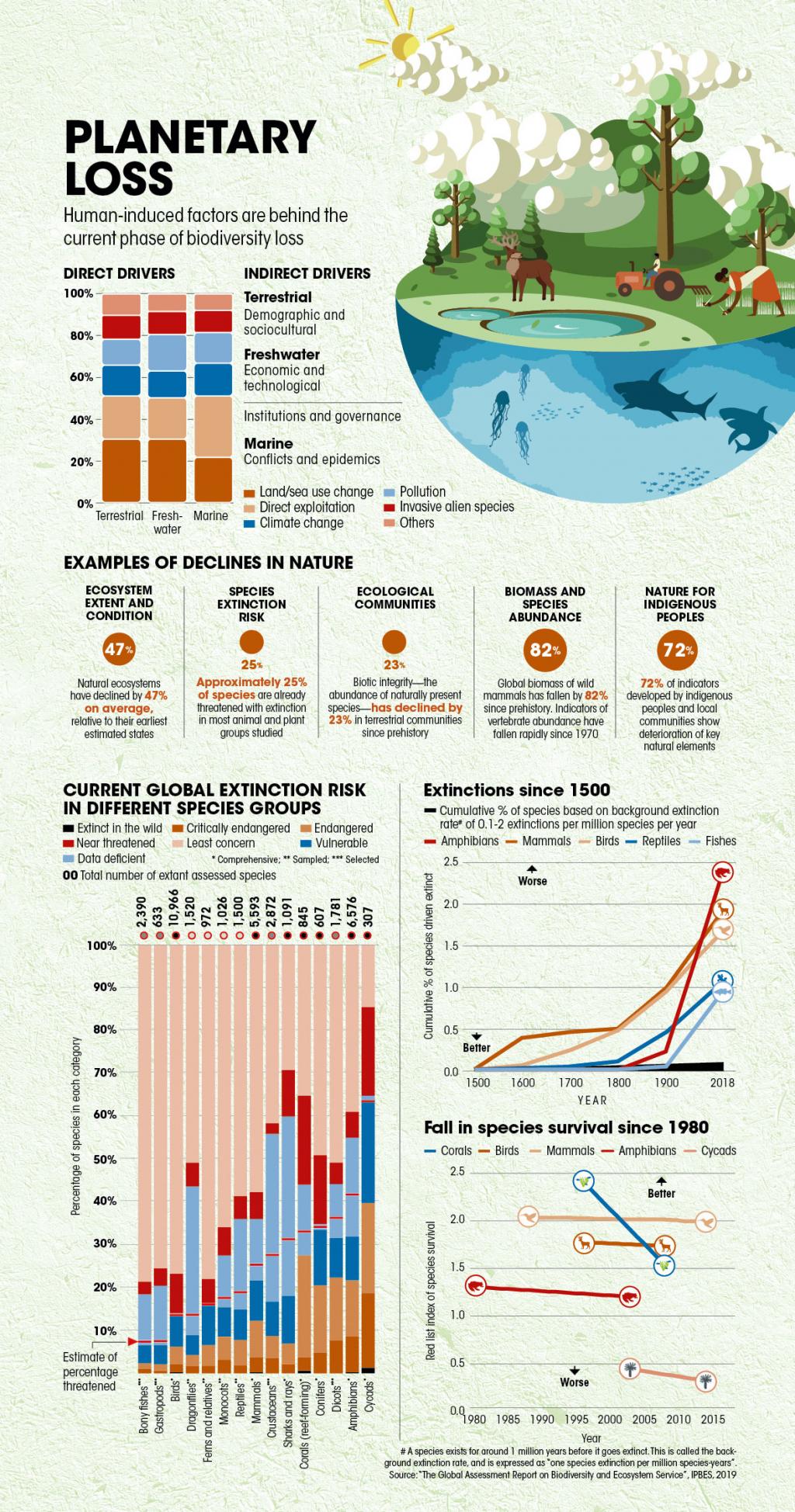 This is the second in a four-part series. You can read the first part here.

Loss of species afflicts all ecosystems — from land to oceans, from sea surface to the yet-to-be-fully-explored seafloors, from forests to desert, and from swamps to rivers. Scientists are now bringing out specific studies to declare extinction of species almost on a daily basis, which makes clear that the planet is hurtling towards mass extinction.

On the deep seafloors, believed to be the harshest habitat, the extinction process is setting in. Elin A Thomas, a doctoral candidate at Queen’s University, UK, researching the state of species in the hydrothermal vents, says this ecosystem is yet to be studied and species fully identified. “Our research found that of the 184 species (of Molluscs) assessed, 62% are listed as threatened: 39 are critically endangered, 32 are endangered and 43 are Vulnerable.” In the Indian Ocean vents, 100 per cent molluscs are already listed as critically endangered, Thomas says. This shows the urgent need to protect them from extinction. Yet, International Seabed Authority, a Jamaica-based intergovernmental body, is allowing deep sea mining contracts.

In freshwater bodies like lakes and rivers that occupy less than 1 per cent of the planet’s surface space but host 25 per cent of all vertebrate species, making them the densest biodiversity, one in three fish species is on the verge of extinction. Freshwater fishes account for over half of the world’s total fish species. IUCN’s Global Species Programme and Species Survival Commission are currently assessing the state of extinction among freshwater fish. “The fact that freshwater biodiversity is declining at twice the rate of that of terrestrial or marine species, is not just an alarming statistic for the environment, it is also highly concerning for people’s health and job security,” says James Dalton, director, IUCN Global Water Programme. “Freshwater fisheries provide the main source of protein for 200 million people across Asia, Africa and South America, as well as jobs and livelihoods for 60 million people. And yet here we are, documenting more decline on our watch.” Populations of migratory freshwater fish have fallen by 76 per cent since 1970 and large freshwater species, such as the catfish, by a catastrophic 94 per cent. 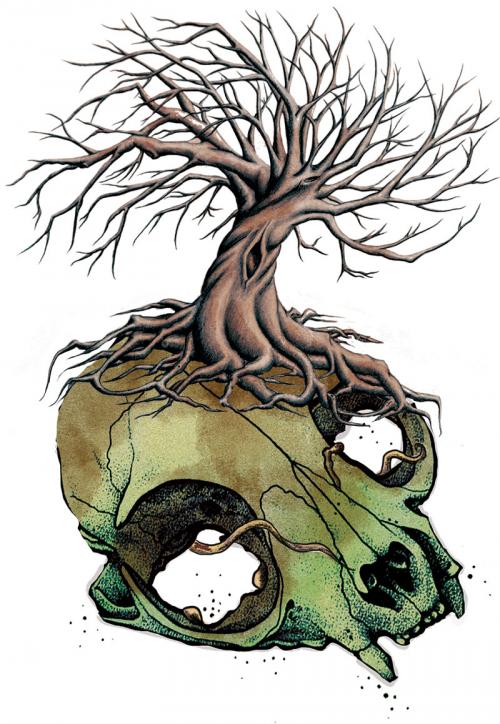 Losing species at such alarming rate has far-reaching consequence on the landmass. Some 300 million years ago, trees started sprouting on the planet. This was an evolution that made food possible for us. Most of our food crops originated from these trees. Every fifth tree species is used by humans for food, fuel and medicines, among other uses. In 2021, Marseille, France, hosted the World Conservation Congress — held every four years and regarded as the largest such congregation — during which conservationists heard with shock the findings of a study: “Over 70 wild relatives of some of the world’s most important crops are threatened with extinction.” The findings, published in the journal Plants, People, Planet, assessed 224 plants closely related to maize, potato, bean, squash, chilli pepper, vanilla, avocado, husk tomato and cotton crops. According to this paper, 35 per cent of these wild species are on extinction mode. The genetic materials from these wild varieties are still used to develop new crops, resilient to changing climate and other needs. Without these trees, we will lose biodiversity altogether disabling us from evolving food crops varieties.

In just the last three centuries, global forest areas have shrunk by 40 per cent. Every year, to meet the timber needs from natural sources, the Earth is stripped of 100 million trees. They store 50 per cent of the world’s terrestrial carbon and provide a buffer from extreme weather, such as hurricanes and tsunamis. Last year the Botanic Gardens Conservation International, a charity based in London, published its five-year assessment called “State of the World’s Trees”. The assessment evaluated 60,000 tree species and found that 30 per cent are at the risk of extinction. Extinction in the plant kingdom is “twice the number of threatened tree species globally than threatened mammals, birds, amphibians and reptiles combined”. Over 440 tree species are on the brink of extinction, meaning they have fewer than 50 individuals remaining in the wild, the report reveals. These species are found all over the world, from the Mulanje cedar in Malawi, with only a few remaining individuals on Mulanje Mountain, to the Menai white beam found only in North Wales, which has only 30 trees remaining.

This rapid, all-pervasive loss of biodiversity is driven by human-induced factors such as climate change and introduction of invasive species

The rapidly snowballing loss in diversity is largely triggered and fuelled by new age emergencies and interventions, like climate change, change in atmospheric composition and spread of invasive alien species. In 21 countries with detailed records, the numbers of invasive alien species have risen by an average of 70 per cent since 1970. This combination of declining endemic species and the spread of already widespread species (humans purposefully or unwittingly transport species around the world) drives “biotic homogenisation” — a convergence of biological communities across regions that blurs the patterns on life’s rich tapestry. According to the Convention on Biological Diversity: “Invasive alien species are species whose introduction and/or spread outside their natural past or present distribution threaten biological diversity.” These species are found in, or known to, impact animals, plants, fungi and microorganisms, and can affect all types of ecosystems.

Invasive alien species have spread across and populated faster. They have been regarded as the most serious drivers of biodiversity loss across the Asia-Pacific region. While agriculture-intensive areas and urban clusters are the usual victims, such attacks mostly happen on islands and around coastlines. For the Asia-Pacific region, this poses a serious threat to local livelihoods. The freshwater ecosystems in the region support close to 28 per cent of aquatic and semi-aquatic species. Around 37 per cent of these species are threatened by overfishing, pollution, infrastructure development and invasive alien species.

In its latest report, “Climate Change 2022: Impacts, Adaptation and Vulnerability”, the Intergovernmental Panel on Climate Change (IPCC) has, for the first time, mentioned the extinctions taking place due to climate change. “In terrestrial ecosystems, 3 to 14% of species assessed will likely face very high risk of extinction at global warming levels of 1.5°C, increasing up to 3 to 18% at 2°C, 3 to 29% at 3°C, 3 to 39% at 4°C, and 3 to 48% at 5°C,” warns the IPCC, reflecting other similar forecast. Species have evolved while the Earth experienced extreme colder and warmer periods.

But the current period of human-induced warming is turning out to be a situation which organisms may find unadoptable. For nearly all the planet’s surface, the warmest period of the last 2,000 years was experienced in the late 20th century and in the first two decades of the 21st century. The current warming is 1.2°C above the pre-industrial levels. This means, from the evolutionary perspective, humans are already moving out of the Holocene environment that ensured the right temperature for us to evolve and take up farming. The IPCC report has reiterated that “in the coming 50 years, 1 to 3 billion people are projected to experience living conditions that are outside of the climate conditions that have served humanity well over the past 6000 years”. The IPCC report cites that half of all species are moving towards the poles or to a higher elevation to adapt to the new planetary climate. At the sea, due to the warming, species have travelled pole-ward at the rate of 59 km per decade on average.