Kaziranga braces to curb human-wildlife conflict ahead of monsoon

Water levels rise inside the park every year, prompting animals to move highlands in areas of heavy settlements

The water levels rise inside the park this time every year, prompting animals to move highlands. Photo: Turtle Survival Alliance

The measures were discussed in meeting organised in the first week of June, according to Mukut Chandra Das, divisional forest officer of Biswanath wildlife division, a part of Kaziranga.

The water levels rise inside the park this time every year, prompting animals to move highlands. This leads to an increased human-wildlife encounter due to heavy settlements in the Karbi Anglong Hills.

The tributaries of the Brahmaputra become clogged due to siltation and cause floods. Though animal movement is a natural phenomenon, highways and settlements block their escape routes.

This is the major reason driving human-wildlife conflicts during monsoon, according to Abhishek Narayanan, head of wild rescue division at the Wildlife Trust of India (WTI).

According to Das, special precautions will be taken in view of the novel coronavirus disease (COVID-19) such as social distancing and use of masks. For sensitisation in villages in and around Kaziranga, the WTI collaborated with All India Radio to air programmes on floods instead of physically arranging for camps.

Das added that unnecessary rescue operations should be avoided as they are hazardous for animals. “We have trained local communities as part of village-level awareness programmes. People should not try to rescue animals out of curiosity or love. For the sake of their safety, government veterinary doctors as well as those belonging to non-profits will handle them,” Das said.

He added the staff will also be trained in post-mortem by senior doctors.

The forest department and several other organisations involved in wildlife conservation are putting in efforts to reduce human-animal conflicts, according to Shailendra Singh, heads Turtle Survival Alliance (TSA)-India.

TSA-India helped the Kaziranga authorities in flood rescue work in 2019. 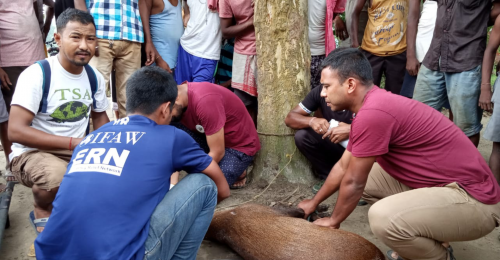 Confidence-building measures such as organising cattle camps can prove to be effective in sensitising the local population along the strategic northern bank landscape of Kaziranga, which records the maximum number of conflict cases, Singh added.

Parimal Ray, TSA’s northeast project coordinator, said the northern bank, close to the Brahmaputra, is a new addition; the south is a popular tourist spot. The northern bank is spread across 401 square kilometre and comprises four ranges.

The TSA had conducted pre-flood awareness camps in 12-15 riparian villages along the Brahmaputra in 2019. This year, it plans to cover all four ranges and 12-15 villages per range.

“We deploy special teams and act according to our standard operating protocol to rescue animals,” Ray added.

Distress calls for rescue of animals entangled in fences in villages are often high during floods. In July 2019, TSA carried out rescue operations in the central range of the Biswanath wildlife division of Kaziranga. Most animals were rescued in the third week of July — a total of 19 cases, including three turtles.

“The extent of damage has not been calculated till now. But people are trying to protect animals. Deer come out in big numbers during the floods and their mortality rate is the highest,” Ray said.

He added that it was important to think of livelihood opportunities for local communities in the northern bank; in the southern part, people earn money by running hotels and eco-tourism lodges.

According to Das, floods are somewhat essential, as it removes unnecessary things such as weeds in its wake. The government and non-profits extend support to the forest department in the form of handing over vehicles and boats, he said.

The river banks, once upon a time, were full of dense jungles; human habitations and tea gardens have now turned the tables.

“Animals in Kaziranga do not come out often except during floods. But there are cases of human-elephant conflicts in Goalpara as well as human-leopard conflicts in landscapes dominated by tea gardens like in Tinsukia and Dibrugarh,” Narayanan added.

The number of human-elephant conflict cases rises invariably, especially in the northern bank, during the floods. In 2019, WTI attended to at least six cases over eight days of floods.

Narayanan explained that the inundation in Kaziranga occurs quickly, but the water also drains out rapidly. The peak time is often five days in the third week of June or in July.

To deal with abandoned baby animals, WTI has been operating the Centre for Wildlife Rehabilitation and Conservation (CWRC) on the southern bank of Kaziranga, along with the Assam forest department, for the last 20 years.

“Mobile veterinary service units associated with the centre constantly monitor rescue operations in case of emergencies. Abandoned and orphaned rhino and elephant calves are hand-raised throughout the year and released back into the wild after two-three years. There is an increase in their number during floods,” Narayanan said.

The four mobile veterinary service units attached to CWRC have attended to over 5,600 case of displaced and distressed wildlife so far. These animals belonged to over 250 species of mammals, birds and reptiles.

According to WTI data, the number of animals rescued during floods range from 20 to 100 cases during five-seven days of peak flood season. Intensity of floods, level of inundation and speed at which it occurs are determining factors, said Narayanan.

According to joint director at WTI Rathin Burman, who is posted at CWRC, handling flood is a routine activity but preparation is needed; 2016 and 2017 witnessed massive flooding as well.

“We get additional doctors, animal keepers and rescue vans at the time of floods,” he said, adding that hog deer are the most vulnerable as they are not great swimmers.