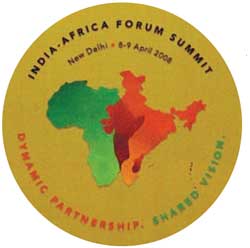 The summit sought to establish a partnership of mutual benefit. If India was looking at market access to a region of more than 700 million people, Africa was seeking cooperation that went beyond cosmetic funding. "Africa wants partnerships that will not use it as a source for raw materials, like colonial rulers, but who will deal with the continent on an equal footing," said the chairperson of African Union, Alpha Oumar Konare.

Africa is interested in moving beyond trade in raw material to investment domain where it provides employment to Africans and helps improve their living conditions. African leaders said they are willing to share resources, but want partners who will help them lift the continent out of poverty. "African nations need help to industrialize. Africa requires technological and scientific development for its drive into modernity and accelerated growth to improve the quality of life of its people," said John Kufuor, president of Ghana.

A 2005 report by un Conference on Trade and Development (unctad) had pointed out that African nations were gaining little benefit from foreign direct investment. The report claimed that much of the investment was targeted at Africa's resource-rich oil and mining industries, which often generate low tax revenues and carry high environmental and social costs. The report had called on the African governments to diversify their economies away from traditional "extractive" industries such as mining and oil. Articulating the future course, the president of the Democratic Republic of Congo, Joseph Kabila Kabange, said: "Africa needs to meet fundamental needs of its population by building schools, providing housing and generating employment."


Experts view the Africa summit as part of the larger Indian search for reducing dependence on stagnant western export markets. In this, New Delhi has some advantage over Beijing even though China's trade with Africa stands around us $50 billion against India's us $30 billion. Africa is keen to get into partnership with India's private sector for its development projects. China has only government-driven projects in the continent.

African nations are looking for investments in roads, railway infrastructure, low-cost housing as also agriculture and food processing. Indian companies have shown interest in investing in these sectors. India has set a target of achieving a trade turnover of us $500 billion by 2010 that includes imports of us $300 billion from Africa.

Then there is history, which gives India an edge over China. India has traded with African nations for centuries. There are more than 2.5 million persons of Indian origin (pio) in South Africa, East Africa and Mauritius. "The contribution of pios to the liberation struggles against western colonialism in their respective African countries is a heritage which has no Chinese equivalent," says Horace G Campbell, professor of African American Studies at Syracuse University, New York.

"China and India have different ways of looking at Africa. We are a democracy and it's in our body language and dealings. Also, India is looking for a long-term investment. We are not there for hit-and-miss. Indian companies employ local manpower, which is creating immense goodwill," believes Shipra Tripathi, head of Africa desk at the Confederation of Indian Industry.

One of the main reasons why Africa is seeking India's cooperation is because it wants to get beyond its exploitative relationship with China. "Africa plays the role of a raw material reservoir and Africans get the worst deal through depletion of their strategic minerals without substantial improvement in living standards," believes Campbell. India already has a long-standing programme called Indian Technical and Economic Cooperation (itec) through which thousands of nominees from African countries have been imparted training in defence preparedness, agriculture, small-scale industries, entrepreneurship, telecommunications and engineering. Excited about the possibilities of India's partnership with Africa, Prof Campbell says: "If India extends initiatives like itec to the entire member base of the African Union, it can send the message that its intentions in Africa are not exploitative."

The future of India-Africa holds great possibilities. Both parties have something to offer the other; both have to overcome challenges that are similar. President Thabo Mbeki of South Africa could not have put it more accurately when he told the summit, "Our enemy is common. We both have poverty and underdevelopment."