Will it be lions or cheetahs that will roam Kuno-Palpur sanctuary? 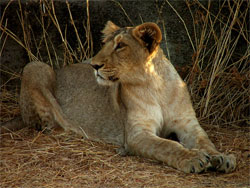 The Gujarat government, which has been opposing the Centre's proposal to translocate Asiatic lions from the state's Gir sanctuary to Madhya Pradesh have proffered a new reason for halting the programme. While arguing the case in the Supreme Court on April 2, counsel for Gujarat said that shifting the lions to Kuno-Palpur wildlife sanctuary would not be feasible because the Centre was planning to introduce Cheetah's there. The Cheetahs to be introduced in Kuno will be brought from Africa. The Gujarat government contended that reintroduction of cheetah, which have gone extinct in India, is now the priority of the Centre.

The state and the Centre have been at loggerheads ever since proposal to translocate a few of the Gir lions was formulated in 2000. Asiatic lions exist only in Gir (they number over 400) and fears have often been expressed that high rate of inbreeding and less genetic diversity may make the Gir lions highly susceptible to epidemics. A study by the Wildlife Institute of India in 2006 identified  Kuno-Palpur sanctuary as a suitable site.

During the hearing in the court, Gujarat government counsel argued that wildlife experts have stated on record that cheetahs should be introduced first in Kuno for better chances of their survival. On the state's demand, the apex court asked the Union Ministry of Environment and Forests (MoEF) to clarify its position on introduction of cheetahs in Kuno-Palpur sanctuary visa a vis the proposal to translocate lions there.

The National Board of Wild Life, the expert body that advises MoEF on wildlife matters, had recommended in 2009 that the lions should be translocated to the Kuno-Palpur sanctuary.

In the last hearing in March, the court had asked the Gujarat State Board  of Wildlife to consider the translocation of lions and present a report to the court. In its meeting held on March 16, the board reasserted its stand that the lions should not be shifted. The board concluded that there are no serious threats to the Gir lions. It noted that past attempts to translocate the lions have failed. The board members said the project proposal was scientifically flawed and ill-conceived.

During arguments in the court, the Gujarat counsel said there is no study to justify that current prey-base density in Kuno-Palpur is sufficient for lions. There are studies which suggest that poaching is continuing in Kuno, which would prove to be a trap for the Gir lions.

The state counsel further argued that since wildlife is a state subject, there should be no interference of the Union government or the judiciary as long as the decision of the state is according to policy. The case will be heard next on April 9 when the Centre and the Madhya Pradesh government will present their side of the arguments.