With about 50 countries voting, 2014 could be world’s most democratic year 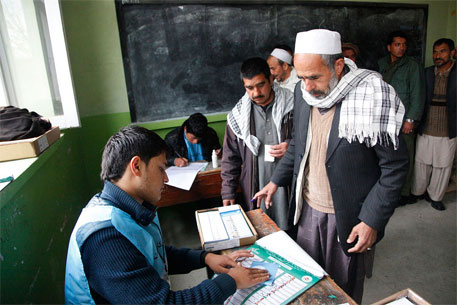 With about 50 countries voting this year, 2014 is an election juggernaut that will influence world politics, development and the direction of ongoing turmoils in Ukraine, Tunisia, Nigeria and countries of West Asia.

The voting for European Union Parliament, which begins later this month, is also expected to change the way economies within the Union and outside will support each other. Europe has been much criticised for its failure to deliver economic growth and jobs. The election will decide the leadership of the European Union for the next five years.

Here is a map that shows countries that go to polls this year. You can click on the country to see in which month it is going to polls and what is the nature of election (general, parliamentary or presidential). (Based on data from National Democratic Institute)


The world’s largest democracy, India, is almost done with elections  and is on course for a record voter turnout, largely attributable to more young and first-time voters. The civil society, this time, has been most active—something not seen before—and is expected to only get stronger.

Five developments that may define 2014 elections

South Africa, which recently witnessed its first election for the country’s “born free” generation with almost 1.9 million voters aged 18-19, looks set to witness another victory for the governing African National Congress. This election marks 20 years since the end of white-minority rule or racial apartheid, which ended in 1994.

Afghanistan went to poll on April 5 and saw unprecedented participation of its citizens in the election. The country has also witnessed the emergence of a new vibrant civil society in the past few years. But no clear majority and a possible re-election (as being projected by news reports) might mean more unrest in the region as the United States plans to withdraw most of its troops from Afghanistan.

Indonesia, the world’s third largest democracy (after India and the US), recently held parliamentary and local elections and will go to presidential poll in July 7. The outcome of the poll is expected to usher in some economic reforms, thus making a strong impact a strong impact on economy of Asia.

While these countries have voted and are waiting see how and whether the new governments will keep their promises, countries like Egypt, Sweden and Brazil are set to choose their new leaders later this year.

A presidential election to be held in Egypt this month is widely expected to be won by former army chief Abdel Fattah al-Sisi who ousted the Muslim Brotherhood government from power in the 2013 military coup. El-Sisi was subsequently appointed as first deputy prime minister, while remaining minister of defence and announced his intention to run for presidential election end of March. The Brotherhood’s Mohamed Morsi (who was removed from the office of president last July) and more than 680 supporters have, meanwhile, been sentenced to up to 88 years in jail in what many call a fast and unfair trial. While elections are scheduled to be held on May 27, the biggest question facing Egypt is whether the election will be free and fair at all.