Within the Earth's guts 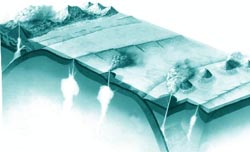 some recent research into the link between the climate and tectonic activity within the Earth's bowels could have important implications for predicting climatic phenomena. This could be especially important for a country like India, which depends overwhelmingly on the monsoons.

Climate modelling and prediction is traditionally based on understanding ocean-atmosphere interactions supposedly controlled by natural variability of sea surface temperature, insolation (exposure to the Sun's rays) and ocean currents. However, limitations in the available knowledge came to the fore when even the most successful forecast model -- the Cane-Dolan-Zebiak model -- failed in 1997-98 to anticipate both the strength and the sudden end of El Nio, one of the most intensively studied and widely known climate phenomena. There is more to climate that simple ocean-atmosphere interactions.

Quite a few phenomena occur concurrently. Firstly, increase in seismic activity along the East Pacific Rise (a submarine mountainous range) during an El Nio has long been established by the us National Ocean and Atmospheric Agency. Secondly, satellite altimetry studies (measurement of altitude) have recorded a change in sea level across the Pacific basin during an El Nio, indicating a shift in the regional gravity field and their link to planetary waves. Finally, a well-known precursor to El Nio is the anomalous temperature rise in the ocean waters surrounding the Indonesian archipelago. The question arises: does El Nio cause this coupling with tectonic phenomena or does tectonic activity cause El Nio?

"My bet would go with the heavy weight," writes Bruce Leybourne of the Stennis Space Center in Mississippi, usa . He proposes a paradigm shift in our understanding of factors controlling the climate. The reason: nature does not play coincidences. It cannot be a coincidence that the three major global sea level pressure oscillation systems, including the El Nio phenomenon, are underlain by tectonically active vortex structures already portrayed by the new hypothesis of Earth dynamics: surge tectonics.

Surge tectonics is based on the concept that the lithosphere (the outer 150-200 km) of the Earth contains a worldwide network of deformable magna channels called surge channels, in which partial melt is in motion. A surge channel is a conduit for magma rise from the asthenosphere, the partially molten layer under the lithosphere. In summary, the Earth above the strictosphere, the hard mantle below the asthenosphere, resembles a giant hydraulic press comprising a containment vessel (the surge channel system), the fluid (magma) and a trigger mechanism (global lithosphere collapse into the asthenosphere when the latter becomes too weak to support it dynamically).

The ultimate cause of all motions in the surge channels and the lithosphere is the Earth's rotation, which explains many of the geographical features such as the presence of the island arcs such as Japan and the Philippines in the east of Asia but not west of the Americas.

The entire hydraulic press phenomenon is linked to gravity. Magma rising from the asthenosphere undergoes inversion to lighter, less compact phases. This expansion decreases density, which reduces the gravitational attraction within the region of the surge channel. Though the phase changes are feeble in terms of gravity, yet they are sufficient to affect barometric conditions. This is what happens during an El Nio -- magma rises from the asthenosphere to the East Pacific Rise through the lithosphere. The slight weakening of the gravity field is translated to the atmosphere as the pressure drops.

This weakening is 'teleconnected' not only to the surface but also to other vortices across the basin near Indonesia, explaining the El Nio phenomenon. This is a Gravitationally Earth Teleconnected Global Oscillation System ( getgos ) controlling climate fluctuations. "Millions of dollars in climate research could have been redirected if we would have known this..." says Leybourne. Attempts are already afoot in the us to create a global array of absolute gravity stations located within the getgos . This would give researchers concrete information to incorporate into earth-ocean-atmosphere models for sound predictions of climate, earthquakes and volcanic activity.

India could possibly improve monsoon predictions by studying the eastward-moving Madden-Julian ( mj ) waves -- a 30- to 60-day weather oscillation -- which originate over the Indian Ocean. In fact, some researchers, including Nicholas Graham of the International Research Institute for Climate Prediction in San Diego, suggest that one trigger for El Nio might be the unusually strong mj waves. Some clues to this may lie in the gravity and seismic factors along the Chagos-Laccadive ridge, which is an offshoot of the Indian Ocean ridges and strikes the Indian coast near Mumbai. Studying this could improve our weather forecasting capabilities. Could the gravity inversion along the Chagos-Laccadive channel be a potentially overlooked factor for "a sudden and sharp" increase in the depth of monsoon front when it is still about 200 km west of the Western Ghats of India? Answers, anyone?