With elections round the corner, the Delhi government has gone back on its decision to phase out 15-year-old commercial vehicles 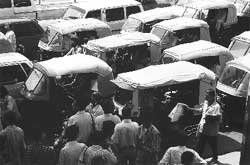 the Delhi government has shelved plans to implement a phase-out of 15-year-old commercial vehicles. Delhi transport minister Rajinder Gupta took a u -turn on the policy decision and withdrew the ban on February 4, with the excuse that the government "would take an objective decision later (after the elections)".

Though the move had been anticipated for some time, the official announcement came a couple of days before the proposed strike by the Federation of Transport Unions Congress. Another powerful autorickshaw owners' union - the Krantikari Autorickshaw Karmachari Sangathan (kaks) - had also announced that it would stage protests on February 5. Both unions are backed by the Congress.

Since the ban was turning into a political weapon for the Congress, Delhi Chief Minister Sahib Singh Verma told the State Transport Authority (sta) to review the proposed ban and the issues involved. The ban was to come into effect from March 1998. Under the revised policy, vehicles would be given fitness certificates after 'stringent checking'.

Vehicle owners said that the ban would have had a major impact on Delhi transport. In the passenger vehicle category, autorickshaws would have been worst affected, being the oldest mode of public transport in Delhi (introduced in the early 1950s). There are some 80,000 autos registered in Delhi. Of these, only 60,000 are on road. About 30 per cent of these (21,000) are 15 years old, according to sta statistics. Last year, the Supreme Court had frozen registration of new autorickshaws, allowing it only in case an old vehicle was replaced by a new one.

Autorickshaws have recently been identified as the most polluting vehicles on road. According to data available with the transport department, Delhi, 47 per cent of the autorickshaws did not meet standards for emission levels between January and May 1996. Most of these were old vehicles. But autorickshaw drivers maintain that the age of the vehicle has little to do with the emission level. Said vice-president of kaks , Thakurdas Giri, "If the vehicle is maintained well, it will emit less smoke. We have asked the government for stringent emission checks and strict punishment for violations."

Others said that banning old autos would affect livelihoods, more than it would solve the problem of pollution. "Banning old autorickshaws is not the answer," said Jag Parvesh Chandra, the leader of the opposition in Delhi. "If it is, then the whole bus fleet would be banned, throwing the public transport system into chaos, and creating unemployment that would affect more than 1,00,000 people," he said. However, these figures are based on an estimate that 60 per cent of the autorickshaws are older than 15 years. The sta figure is half that.

Giri was also sceptical about the effect of the proposed ban: "Pollution will remain a problem unless clean fuel is provided. Check for yourself what kind of fuel is available at petrol stations. A ban would just not help in curbing pollution. We may get new vehicles but if the same adulterated fuel is used, the problem would remain."

The Delhi government took the decision after the auto union leaders met members of both the ruling Bharatiya Janata Party (bjp) and the opposition Congress. The Congress leaders had already been supporting the unions. Jag Parvesh Chandra even attended a protest rally held by autorickshaw owners. Reportedly, the Delhi chief minister had made up his mind on withdrawal of the ban before the decision was taken by the transport minister. It may be recalled that the bjp government had to change its mind over its decision to scrap driving permits in December, 1997, when Blueline and chartered buses went off the road in protest against the order. It may be recalled that allegations that the government was influenced by the autorickshaw owners' lobby in taking the decision were widespread at the time.

However, sta officials had stopped giving permits to commercial vehicles which were over 15 years old even before the government took the decision. Says Nanak Chand of the planning division, sta : "We have stopped giving permits to commercial vehicles which are more than 15 years old". No new autorickshaws have been registered in Delhi from March 31, 1997. "New autorickshaws have not been sold in the Delhi market in the past year," says Parveen Bagga , president of the Delhi Petrol and Diesel Vendors' Association.

The change in stance of the Delhi transport ministry may benefit some autorickshaws owners. But the effectiveness of measures to control pollution in Delhi -- especially checking of vehicular emission -- remains doubtful.