Women to the fore 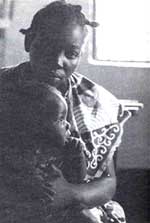 "WE HAVE to find ways of creating an environment in which the individual most affected (by population control measures), in this case woman, is also part of the decision-making process," Nafis Sadik, executive director of the United Nations Population Fund, told the press in New York, on the eve of the preparatory committee meeting of the International Conference on Population and Development (ICPD). Sadik, who is also the secretary-general of ICPD says that in its future action plans, the conference intends to focus on empowering women and recognising them as the primary managers of natural resources.

This is not a new concept. International organisations have always been more than keen to pay lip service to the cause of the women. Fortunately, the tone of this convention is more forceful than ever before.

This was evident at the 2-week long third and final session of the preparatory committee held in New York in April, when delegates from 170 countries met to negotiate the final draft document to be adopted at the Cairo Summit in September. According to UN sources, "The halls and corridors bustled with unprecedented numbers of representatives of women's groups and they seemed to have real clout with the delegations." Indeed, women have become more vociferous and it may well be difficult to ignore them.

However, Mira Shiva of the Voluntary Health Association of India says she was dissatisfied with the preparatory committee meeting. "I felt that the entire attention was being focused on the issue of population control as a result of which development had taken a backseat," she complains.

As a result of this "lop-sided" approach, some controversial issues such as the unsustainable consumption pattern of the industrialised nations, which the South argues is primarily responsible for the environmental crisis faced by the planet today, have not been discussed, Shiva says: "How can we hope to find a workable solution to the problem, if we fail to get to the root of the problem?"