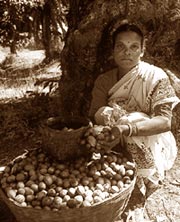 A commonly used Indian herb, Terminalia chebula, which belongs to the family Combretaceae, is likely to receive international attention following the discovery that its fruit can protect people from the damage caused by nuclear radiation. The discovery has been reported by G H Naik, K I Priyadarsini and H Mohan of the radiation-chemistry division of the Bhabha Atomic Research Centre (barc), Mumbai. The researchers say their studies have shown that an extract of the fruit of T chebula -- locally known as harde -- is a potent antioxidant that protects cells from radiation-induced damage.

Naik and his colleagues carried out their studies on microsomes and mitochondria -- components of a cell -- isolated from rat liver. When microsomes containing the fruit extract were exposed to a dose of 100 to 600 gray (gy) of gamma radiation, there was much less lipid peroxidation than normal, the scientists report. Peroxidation of lipids is a measure of damage to the cell membrane caused by the 'reactive oxygen species' generated by radiation.

The fruit extract inhibited the peroxidation of lipids in microsomes by 50 per cent at a concentration of 15 microgrammes per millilitre. Similar results were obtained when mitochondria from rat liver containing the extract were exposed to a radiation dose of 240 gy.

The researchers found that in the presence of the T chebula extract, the level of an antioxidant enzyme called superoxide dismutase (sod) remained almost normal in mitochondria. But in the absence of the extract, the activity of sod decreased by 45 per cent -- this is because the radiation generated the damaging reactive oxygen species.

Summarising their work, Naik and his colleagues say that the fruit extract "was found to be an extremely 'efficient' inhibitor of radiation-induced lipid peroxidation" and can be used in future to develop drug molecules.