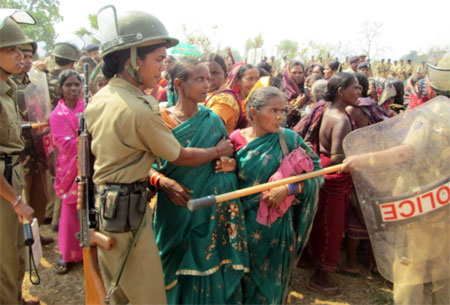 Work on the Lower Suktel irrigation project in Odisha was started this week amid public protests and heavy security. Police arrested 70 members of the people's front fighting the project as they forcibly entered the project site to try and stop the work at Pardhiapali, about 25 km from Balangir town, on Tuesday. The dam authorities had began work on the project on the Suktel river, a tributary of the Tel, on Monday. Apprehending more trouble, extra police force was deployed at the project site next day. The Odisha Construction Company officials continued with the lay out work of the spillway of the project.

At least 1,200 people of the Lower Suktel Budi Anchal Sangram Parishad (LSBASP), including women and school children, thronged the project site and protested construction of the dam spillway which they say is illegal. Those arrested included president and vice president of LSBASP, Ghunu Sahu and Udaya Singh Thakur. Superintendent of police (SP) of Balangir, R Prakash, said the arrests were made to ensure that the work of the project continues. “We neither applied any force nor did we arrest any women or children. We will see that work of the project goes on smoothly,” Prakash said.

The Rs 1,041 crore project had been hanging fire for the past 12 years due to the ongoing conflict between the pro-dam and anti-dam activists. The project, when completed, will irrigate 29,146 ha of land in Balangir and 2,684 ha in Sonepur district, covering 189 villages. Despite the arrests, people of the area said that they will continue their fight. “Let police arrest us. Still, we will come here everyday and will oppose the project work. Under no circumstances will we allow the project,” said Pabitra Gadtia, an anti-dam activist. General secretary of LSBASP, Satya Banchhor, said the government had not kept its promise. “It is unfortunate that despite assurance by the state chief secretary during the bilateral talk that LSBASP would be informed about the project status, the government had resorted to secrecy about date of commencement of the project. Moreover, the government decided to start the project at gun point,” he alleged.

LSBASP says there is no necessity of a dam. “Instead smaller traditional water harvesting structures can be made to address the irrigation problem of the farmers. The government never delivers when it comes to rehabilitation and compensation to the displaced villagers. The Rengali project and Hirakud dam projects in Sambalpur district are glaring  examples. We don’t need the dam”, said Thakur, vice president of LSBASP.

As per the project plan, the project includes an earthen dam 1,410 metre long and 36 metres high. The scheme contemplates two main canals, one taking off from right bank with a length of 25.2 km and another taking off from left bank having a length of 27 km. The net catchment area of the project is 1,130 sq km. The are that will be submerged by the project includes forestland (583 ha), private land (3,847 ha) and government land (786 ha). The reservoir will submerge 16 villages fully and 10 villages partly. The dam will be constructed at Magurbeda village about 25 km from Balangir town.

Call for fresh project evaluation, clearances
Convener of Water Initiative Odisha, Ranjan Panda, condemned the use of police force to undertake construction work. “The irrigation project’s design was approved almost a decade and half ago. In all these years, even though the government could not proceed with the project, it did not do anything either to solve the drinking water and irrigation problems of the area. The current anger and agitations are, therefore, creation of government’s apathy. The government should not delay further on this and talk to all the people, both the villagers who fear submergence and the people who are proposed beneficiaries,” he said. He added that that the long delay has rendered all approvals and clearances, including environmental clearance, invalid. The government, therefore, has got no right to continue with this project without looking at the designs and social and ecological impacts afresh, he said.