World Bank at it again 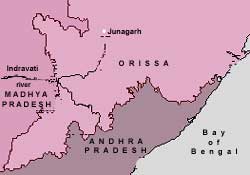 the World Bank's (wb) staff appraisal report (sar) of the Orissa Power Sector Restructuring Project (opsrp) of April 19, 1996, seems to have emerged as a bundle of contradictions as far as the Indravati hydropower project is concerned. Orissa is the first state in India to get a wb aid for its power sector reforms programme sanctioned recently.

Most importantly, the sar mentions that the wb had to cancel its loan (Ln 2278-in) and thrice suspend its earlier credit (Cr 1356-in) for the controversial 600-mw Upper Indravati hydroelectric project (uip) for several reasons. This included inadequate resettlement and rehabilitation (r&r) of the people affected by the project (p13 and Annex 5.3 of the sar). The sar says that, "Further support for Upper Indravati's environmental and r&r aspects is proposed to be provided under the project." But the sar fails to specify the r&r policy to be followed for Upper Indravati's oustees, nor does it mention what remedial changes would be effected.

As a matter of fact, the sar does not even mention how many people are likely to be affected by the project, nor what the r&r plans for the affected people are. Very significantly, the decision to fund this large dam underlines the wb's failure to learn from its past mistakes.

There are a number of other contradictions in the sar. For example, page 19 and the Annex 3.3 says that, "There will be no resettlement involved in the above projects." It is well known that the uip involves largescale displacement. To overcome the problem, the wb seems to have found a via media -- the uip is now being funded by a Rs 320 crore assistance from the Power Finance Corporation, which in turn is funded by the wb, among others.

There are further contradictions about the r&r policy and plans. For instance, while the project appraisal criteria (Annex 4.4) mentions that a r&r plan "satisfactory to the Bank, shall have been prepared", a letter from the principal secretary of the Orissa government (Annex 2.2) to the wb says that the power projects will be implemented in accordance with the state and national r&r policies.

But there is no state or national r&r policy that would satisfy the wb's appraisal criteria. Moreover, the sar notes that in Orissa, power connection "rates are still low in rural areas and the poor typically do not have a power connection." And the steep rise in power rates across the board, following the approval of the opsrp loan is only expected to make power connections further out of reach of the poor.