criticism against the World Bank (wb) has just become strident. At a time when India has become the biggest recipient of wb loans, a people's tribunal in Delhi has accused the bank of trying to influence the country's policies in favour of the corporate sector. Questions are also being raised whether it is India or the bank that benefits from the lending business.

The Independent People's Tribunal on the World Bank, held at Jawaharlal Nehru University (jnu) from September 21 to September 24, publicly audited programmes introduced by the bank in India for developmental activities. After listening to 60-odd depositions made by activists, economists, lawyers and researchers, the jury, in its preliminary findings, charged the bank with serious violations of democracy and human rights and indicted it for meddling with India's sovereignty.

The tribunal's condemnation has come after wb's lending to India increased by 169 per cent in 2006-2007 over the previous year. The bank has sanctioned credit worth us $3.8 billion to India, the highest lending from any multilateral bank to any country.

The jury, which included activist Aruna Roy, former Supreme Court judge P B Sawant, writer Arundhati Roy and economist Amit Bhaduri, noted that the bank had a negative influence on India's national policies. The bank said it was not accountable to the people's tribunal and stayed away.
The accusations levelled against the bank were many, whether it was 137,000 cases of suicide by farmers between 2001 and 2007, fisherfolk's problems with costal zone management, water privatization in Karnataka and Delhi, relocation of slum dwellers or rehabilitation of tsunami victims. The consensus that emerged at the tribunal was that in the name of development, the bank has helped corporates make billions while ignoring the need for equity, community participation and local problems. The view adopted by the tribunal was that wb had tactically planned its agenda in such a manner that countries seeking assistance would be forced to change their policies and laws according to its dictates. Bureaucrats on deputation to wb and similar organizations, like the Asian Development Bank and the International Monetary Fund, return home only to become clearing agents for these institutions.

The bank has also positioned itself as a credible knowledge provider, funding policy-oriented research. During 2005-08, the bank plans to undertake 15 major studies, including strategic issues in India's water sector, agricultural marketing and value chain development. The bank uses such research, prepared jointly with Indian policy and economic research institutions and think tanks, to push policy 'reforms'.

Arun Kumar, professor of economics at jnu, criticized the bank's manipulative tactics adopted while issuing loans for developmental activities. Kumar says it has systematically used these loans to bring about a change in policy by imposing conditions on governance reforms and the health, education, water and environment sectors. He gives examples of national legislation overhauled after the structural adjustment programmes of the bank. These include changes in the Reserve Bank of India Act 1934, introduction of the value-added tax in Andhra Pradesh and the revision of the Coal (Nationalization) Act 1973.


Kumar says the policies propagated by wb in India have meant 'growth at any cost', with no attention to distribution so that the entire cost of growth has fallen on marginalized sections comprising farmers, workers, artisans, etc. "Recently, corporate sector profits have risen at a rate of 30 per cent .... The sector, which represents less than 1 per cent of the population, now has a greater share of income than 60 per cent of the people who depend on agriculture," he says.

Speakers from across the country expressed concern at the fact that wb, along with other international agencies, has pushed privatization, which does not necessarily translate into economical services. Citing an example, a representative of the ngo Campaign Against Water Privatization-Karnataka (cawp-ka) said many international agencies, including wb, the Water and Sanitation Program (wsp) and us Aid, as well as local ngo s, were advocating complete metering for water supplied in slums. "In 2002, us Aid funded a Master Plan project to provide water to the urban poor. This was based on the belief that the poor were willing and able to pay for water. They experimented in 15 slums in Bangalore. wsp and wb have used these studies to promote privatization," the representative said.

Arvind Kejriwal of Parivartan, an ngo working for right to information, says Delhi's water-privatization scheme proposed by wb could lead to an immediate, manifold hike in water rates. "The overheads and the maintenance cost for the distribution of water by the Delhi Jal Board was Rs 163 crore. If the new proposal is implemented, Rs 105 crore will be spent only on salaries of consultants working with the project," he says.


Other speakers, including Shripad Dharmadhikary of Manthan Adhyayan Kendra, a Madhya Pradesh-based centre dealing with water and energy-related issues, spoke about how the bank was playing the role of knowledge provider. "Knowledge is being actively used to promote policies of liberalization, privatization and globalization," says Dharamadhikary. Referring to the Country Assistance Strategy 2005-08 of the bank, he notes, "At the centre, the bank could offer knowledge support to build consensus on key reforms, such as trade and tariff reforms, foreign direct investment (fdi) regulations, corporate restructuring and state-owned enterprise reforms." Earlier, the bank focused on "willing states", but now it is "proactively pushing reforms in states which may be reluctant", he adds.

Manju Menon and Kanchi Kohli, members of Delhi-based environmental group Kalpavriksh, critiqued the role of the bank in clearing environmentally and socially unsustainable projects. Referring to the Environmental Impact Assessment notification as a casualty, they argue that the tool for environmental decision-making was re-engineered by the bank's market-based solutions to compromise the spirit of participation and transparency in decision-making.

The World Bank denies the charges. Praful Patel, vice-president in charge of south Asia, says "The bank is largely supporting Indian-led initiatives. We are not designing programmes. We are putting money into well-designed programmes." 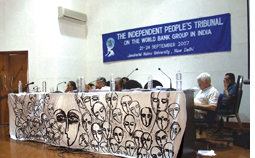 According to sources in the Union Ministry of Finance, there is no pressing need to borrow from wb. On the contrary, the bank needs India to survive. In 2005-06, India paid wb Rs 14,87.3 crore as interest on loans taken from its arms, the International Bank for Reconstruction and Development and the International Development Association.

India's gdp is growing at a rate of over 9 per cent and the country's revenue collections in 2006-07 stood at Rs 4,03,465 crore, marking an increase of 15.8 per cent over the past year's collections. The country's foreign currency reserves are at a record high of us $260 billion. fdi in 2006-07 was us $16 billion, three times the previous year's. "wb loans are just not necessary given the huge capital access we have now," says Ravindranath of Rural Volunteers, an ngo that monitors such lending.

So why does India borrow? India needs about us $40 billion by 2009 to improve irrigation, housing, water, electricity, telephones and roads. If the country invests in this, its fiscal deficit will increase. Therefore, it needs alternative sources of investment. "But spending on rural infrastructure and other pro-poor programmes hardly attracts private funding. Domestic banks are also not agreeing to lend money for such programmes," says a senior official of the economic affairs division of the finance ministry that deals with wb loans. It is under these circumstances that wb steps in.

Curiously, India too exploits the situation. The country is increasingly getting commercial loans from the bank. The central government lends the money borrowed from wb to states at a higher interest rate. Sources in the finance ministry say a loan with an interest rate of, say, 3 per cent from the bank turns into a loan at 6 per cent for states. Recently, the government allowed states to secure loans from the bank directly. This lessens the interest rate for states, but encourages them to take more loans. "States are now accumulating more debts. This is the case in Andhra Pradesh and Orissa," says Souporno Lahiri of the People's Forum Against adb, a coalition of organizations on multilateral development banks.

The bank justifies its increased lending to a middle-income country like India by citing the large number of poor people in the country. But the fact is that it needs to lend more to increase its earnings. And India has been its biggest customer, which has received about us $60 billion worth of assistance since the 1940s.

Currently, a fifth of the bank's new soft loans are paid for with repayments on past loans. It is estimated that in 20 years such repayments will finance almost all new soft loans. But the bank will still be short of meeting its administrative expenses. The bank's earning from its investments on its accumulated capital of around us $1 billion does not match its administrative budget of us $1.7 billion (2004). Thus, if wb does not lend more money now, its future business is at stake.