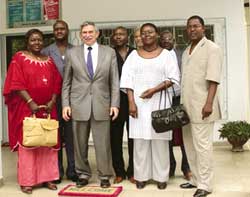 Ending a six-month long suspension, the World Bank has agreed to continue financial assistance to Chad, after the country fell in with the bank's conditions on spending petrodollars. Under the agreement, Chad has said it will devote 70 per cent of its oil revenues to poverty reduction programmes in the areas of health, education, agriculture, infrastructure, environment, rural development, de-mining and good governance. The country, identified as the fifth poorest in the world, has also committed to work out a new poverty-reduction strategy. The bank had suspended its loans in January 2006 after the Chadian government scrapped a scheme that required 80 per cent of the country's petrodollars to be spent on development projects. The bank was partly financing an oil development project whose pipelines link Chad's southern oilfields to terminals on the Atlantic coast via Cameroon. Chad, though rich in oilfields, has become an oil-producing country only after the completion of the project in 2003.