Needs to decarbonise economy at a rate of 6.2 per cent a year till 2100

It would not be unfair to say that global ambitions to reduce carbon emissions are becoming like New Year’s resolutions: the intention is sincere, but we seldom deliver on them. After all, the world has missed its global carbon targets—for the sixth straight year—according to the PwC Low Carbon index. The target calculates the rate of decarbonisation of the global economy that is needed to meet Intergovernmental Panel on Climate Change (IPCC) target of limiting warming to 2 degrees Celsius.

The report says that the world needs to decarbonise its economy at a rate of 6.2 per cent a year—which is five times the current levels of 1.2 per cent— till 2100 to limit global warming. “On our current burn rate we blow our carbon budget by 2034, sixty six years ahead of schedule. This trajectory, based on IPCC data, takes us to four degrees of warming by the end of the century,” says the report. 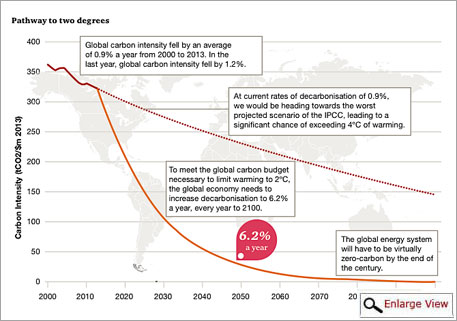 It says the physical impacts of climate change will vary from country to country, but in a highly globalised economy, no country is likely to be spared as the impacts of climate change ripple around the world. UK, according to the report, “will face adverse domestic impacts in the form of extreme weather events such as flooding, storms and heat waves, as well as some negative impacts on agricultural production”.  This will impact its domestic agriculture sector and in turn all the countries dependent on it.

At the national level, Australia is at the top of the decarbonisation nations with an impressive 7.2 per cent reduction on use of carbon over 2013. Three other countries — the UK, Italy and China – achieved a decarbonisation rate of between 4 per cent and 5 per cent. The countries had a strong increase in renewable generation, albeit from a low base, combined with slight a reduction in coal use. The US was nearer the bottom as coal use bounced back, retaking a share of the electricity mix from shale gas. India’s carbon intensity increased by 0.9 per cent, says the report. The two worst performing nations were Germany and Brazil.