The Third World Water Forum took place recently in Japan to explore methods to optimally harness this vital resource, especially in developing countries. But after a week of countless meetings and seminars, the end result was far from satisfactory 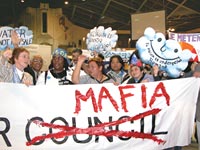 The Third World Water Forum took place recently in Japan to explore methods to optimally harness this vital resource, especially in developing countries. But after a week of countless meetings and seminars, the end result was far from satisfactory. The delegates, including ministers, bureaucrats and representatives of private water companies, arrived at a "declaration" which primarily comprises rehashed promises made at earlier conventions. Foremost among them is the so-called millennium goal, which purports to reduce by half the number of people without access to clean water by the year 2015.

Talks revolved around methods to tackle floods, drought, global warming and the means of funding these projects. The World Bank estimated that developing countries needed to double their investment on water to us $180 billion per year. The Asian Development Bank (adb) chipped in with an agreement with the un Habitat on Water to lend us $500 million over five years.

Non-governmental organisations (ngos) seemed particularly vexed by the governments' fixation with big dams. Some questioned the credibility of the forum, calling it a means to promote huge infrastructure projects on the pretext of providing solutions to water crises. Delegates from pressure groups Water Aid and Tearfund criticised international lending institutions for being obsessed with the private sector. The key issue of public-private partnership was left unresolved, with companies expressing their inability to provide water services to the poor on the pretext that they had suffered financial setbacks in their forays into developing countries.

The Iraq war, which broke out during the course of the meet, fuelled concerns of water becoming a cause for regional conflicts, especially in West Asia. Mona El Kody, chairperson of the National Water Research Unit in Egypt, testified that inadequate access to water created a "non-human environment", which bred frustration and terrorism.

The forum saw the launch of a new international agency, The Water Co-operation Facility, to mediate in water disputes between nations sharing a single river basin. The body, to be chaired by France, will be based in Paris at the headquarters of unesco .

The United Nations Development Programme (undp) made a commitment to launch a Community Water Initiative (cwi). It aims to assist local communities in meeting water and sanitation challenges. The estimated target budget of the cwi has been set at us $50 million for 2003-2008. Participants also came out with the Indigenous Peoples' Kyoto Water Declaration, which deals with the formation of a network on water issues. This is expected to empower local communities struggling to protect their water rights. Apart from these cosmetic steps, the more than 12,000 delegates that congregated in Japan for the forum ended up just talking shop.