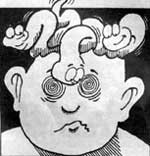 The Hindi proverb that derides the enfeebled mind as one with "worms in the brain", is no longer a literary expression. A study involving 159 worm-infected Jamaican children between 9 and 12, showed that removing moderate to heavy amounts of worms from children led to a significant memory improvement, in comparison to a control group who received a placebo and remained infected throughout. Furthermore, in just nine weeks the same children were as normal as uninfected children. While how worms affect children's memories is still a mystery, researchers say it may be that worms affect the general well-being of the infected child, causing fatigue among other things.