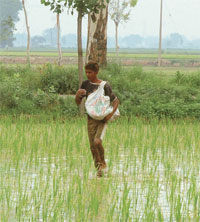 UREA is one of the most commonly used fertilisers in India, thanks to big government subsidies. It is a good source of nitrogen for the soil but the fertiliser does not come without its share of evils. Urea used in excessive amount, leaches in the runoff from the fields. This, on the one hand, leads to nutrient loss and on the other hand, contaminates nearby water sources with urea and nitrate, which is produced when bacteria metabolise the fertiliser.

Educating farmers about judicious use of the fertiliser is the easiest way to improve the situation. But since most such efforts have failed, scientists have been trying to develop ways to find a way around this. A research team, led by A Subba Rao and A K Biswas of the Indian Institute of Soil Sciences in Bhopal, has now found that coating urea molecules with pine oleoresin (POR) slows down the release of the fertiliser in the soil, preventing losses. Pine oleoresin is a complex mix of terpenes produced by pine trees.

Studies have shown that 30-60 per cent of urea-based nitrogen is lost in the form of ammonia through volatilisation or through degradation by the urease enzyme produced by bacteria present in the soil. In the past attempts have been made to coat urea with sulphur and neem powder to ensure its slow and sustained release but POR coating has been found to be much more effective than these methods.

“Oleoresin forms a physical barrier around the urea molecule making the process of nitrogen release slow. Phenol- and ketone-based compounds of the oleoresin bind with urease of the bacteria and inhibit their activity,” says Biswas. “The pH at the urea microsite decreases because of the pine oleoresin. This reduces volatilisation loss in the form of ammonia.”

In their report published in Current Science on April 25, the scientists demonstrate that the oleoresin-coated urea loses 10 per cent of nitrogen by volatilisation in comparison to 17 per cent loss from normal urea. They experimented with soils from Bhopal, Ludhiana, Jaipur and Betul and found that urease activity decreased considerably in soils treated with pine oleoresin irrespective of the soil type. “Pine oleoresin can be used as a urease inhibitor in soil and POR-coated urea can be a better substitute for neem-coated urea,” says the report.

Application of oleoresin-coated urea has the potential to greatly reduce nitrogen loss and drastically cut down the requirement for urea application in fields. This would lead to reduced nitrogen run-off and a healthier environment. How cost effective and efficient this technology is remains to be seen.