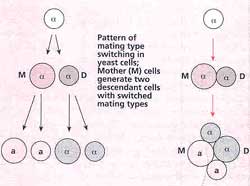 life begins with a single cell - the fertilised egg. The egg, on its part, undergoes a number of divisions and ends up as an adult plant or animal. The most striking feature about an adult is that its body is made up of a number of specialised parts, all of which are different from one another.

It follows, therefore, that some cell divisions must be asymmetric: a mother cell must divide to give rise to two unlike daughters. The most sustained investigation into the origin of this asymmetry has taken place in relation to the problem of switching of mating types in the homely yeast.

Yeast cells are of two mating types - 'a' and 'alpha'. When an a cell meets an alpha cell, the two signal to each other - in order to satisfy themselves that they actually are what they appear to be - stop dividing, extend projections in each other's directions and mate. Two a cells or two alpha cells do not mate with each other.

Fascinatingly (and unlike the two sexes in humans), the a and alpha mating types are unstable. Sometimes an 'a' cell can 'switch' to 'alpha' and vice versa. This does not happen in a random or haphazard fashion. Instead, when a yeast cell - let us say belonging to mating type a - divides, it does so by budding. The bud arises as a small outgrowth on the surface of the cell and is called the daughter; the cell on which the bud appears is the mother. The unwritten rule for switching mates is as follows: when a cell divides, it is almost always the mother whose mating type switches at the time of the next division, and very rarely the daughter.

The problem of asymmetry in mating type switching has been tackled over the years by a combination of elegant genetical and molecular biological techniques. A series of recent papers by groups led by K Nasmyth of the Research Institute of Molecular Pathology in Vienna, Austria, and I Herskowitz of the University of California in San Francisco, us, tell us of the most recent advances in the field (Cell, Vol 84, 1996).

To put it in a nutshell, the story has to do with a spatially asymmetric regulation of genetic expression. The earliest discovery, made some years ago, was that the mating type depended on the activity of specific sequences of dna that functioned like tape cassettes; a cells had an active a cassette but inactive alpha cassette. Correspondingly, alpha cells had an active alpha and inactive a cassette.

An a-to-alpha switch was caused by the physical replacement of the a cassette by an alpha cassette (and vice versa for an alpha-to-a switch). The switch occurred in mother cells because an enzyme (ho endonuclease) that removed the cassette was expressed almost always in the mother.

This, however, took the problem one step backwards: why is the ho gene, that encodes ho endonuclease, active only in the mother? It turns out now that the reason is because there is another gene known as 'Ash1p' that is active only in the daughter. Ash1p influences ho in a negative fashion: ho is inactive wherever Ash1p is active. But what makes Ash1p restrict its presence to the daughter?

Researchers delving into the mystery can only venture to make intelligent guesses based on their studies. One explanation involves a number of genes, collectively known as she, that are required for the preferential accumulation of Ash1p in the daughter. Removal of a she gene allows Ash1p to be present symmetrically in both mother and daughter. One of the she genes, she 1, appears to encode a contractile protein, myosin (similar to the contractile proteins that are responsible for muscular activity).

So it is presumed that polarised transport - through a force-generating mechanism involving the she 1 product - might be responsible for moving the Ash1p product away from the mother to the daughter nucleus. Of course, it is possible that Ash1p is made only in daughter cells. If so, one would need to go back genetically (look for other genes which might be the cause) so to speak, to find out why.

Fascinating as these insights into the molecular mechanisms responsible for mating type switching are, a basic question remains unanswered: what is the reason behind switching? The simple-minded response would be to say that switching is the necessary prelude to mating, and mating, or sexual reproduction, is good for an organism because it enables it to shuffle its genes.

But in the present case, it would appear that shuffling cannot take a yeast cell very far.After all, if it is only a single gene switch that separates a and alpha, for all practical purposes a (or alpha) is mating with itself, and the amount of new genetic variability generated by this mating must be negligible.