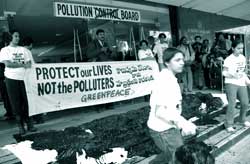 Tired of bringing the same news to the public, inspired activists in Hyderabad recently brought pollution to the pollution board. Armed with bucket-loads of "toxic sludge" from polluted lakes in Medak district, Greenpeace India representatives paid a surprise visit to the Andhra Pradesh Pollution Control Board (appcb). Slinging the sludge around the board's offices, one activist noted that, "since the scientific documentation of toxic sludge failed to move the officials, we hoped that the sight and smell of it would."

In addition to over 20 lakes and over 20 lakh people, the Medak region is home to large industries, including drug, pesticide, paper, and chemical manufacturers. Calling the environmental destruction that has gone on in the region over the past 20 years one of "Modern India's biggest environmental atrocities on its own people", protesters pointed to a report released last year by Greenpeace India linking the area's reportedly contaminated groundwater with abnormally high rates of cancer, heart and respiratory diseases.

Medak's industries, Greenpeace alleges, have been given clearance by the appcb to continue their polluting activities.