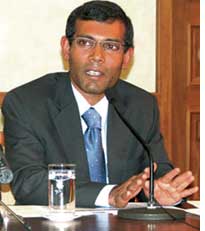 THE Maldives has decided to de-carbonize itself by giving up fossil fuels and switching completely to renewable energy. President Mohamed Nasheed on March 16 said US $110 million would be spent every year for the next one decade to eliminate fossil fuel use.

As per the plan, 155 large wind turbines, half-a-kilometre of solar roof panels and a biomass plant to extract oil from coconut husk will be set up. The country also plans to harness electricity from ocean waves and switch to electric vehicles. There will be battery banks to offer backups when wind and solar energy are not available.

Climate change experts, Chris Good all and Mark Lynas, who prepared the road map say the plan is realistic. Investments will be recovered in less than 20 years as the country would need to import less and less crude oil, they said.

The Maldives, a low-lying island on the Indian Ocean, is most vulnerable to global warming. Five other countries, Costa Rica, Iceland, Norway, New Zealand and Monaco, will also become zero emitters, but none of them targets as early as the Maldives.