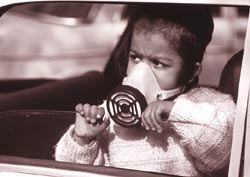 a decade after air quality standards were set for respirable suspended particulate matter (pm10), the Union government is geared up to fix a maximum permissible limit for fine particulate matter (pm2.5) emissions. pm2.5 forms a major part of pm10 but is considered more hazardous than the latter. It is emitted mainly by vehicles and other combustion sources. While the current daily standard for pm10 is 100 microgrammes per cubic metre of ambient air, that for pm2.5 is proposed to be set at 75 microgrammes per cubic metre.

It was in 2002 that the government first recognised the importance of regulating fine particles. An expert committee, constituted by the Central Pollution Control Board (cpcb) in that year, finalised the new norms on February 24, 2004. The cpcb will forward its recommendations to the Union ministry of environment and forests for approval and notification. "We want to implement the standard soon," says B Sengupta, member secretary of cpcb. He is also a member of the expert panel.

The standard has been arrived at after two years of deliberations between the cpcb, state pollution control boards, Indian Institutes of Technology and other specialists. The expert committee was established to "evaluate policy and guidelines to prevent, monitor and control pm2.5 in ambient air". It set up four subcommittees for studying different aspects of the subject -- one for monitoring pm2.5; another to conduct its source apportionment study; yet another for prevention, control and air quality standards of pm2.5; and the fourth for carrying out health studies.

Although the subcommittees have yet to finish their tasks, the expert panel has gone ahead and suggested a provisional daily air quality standard for pm2.5 on the basis of a study conducted by the West Bengal Pollution Control Board (wbpcb). According to the committee, there is not adequate data yet to establish the annual average limit.

Even the setting of the provisional standard was not easy. The selection and cost of monitoring equipment was a major hindrance. Besides, a subcommittee suggested deferring the recommendation of the standard and proposed an alternative. Objections to setting the standard were also raised within the panel in the form of economic concern for the industry. Further, it was apprehended that a strict norm might be unattainable. But the expert committee decided to go by the wbpcb study and set the standard.