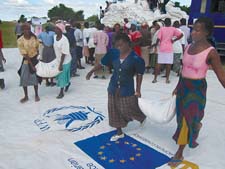 In the last week of April, the Zimbabwean government invited two un bodies to conduct a joint food-security survey in the country. The Food and Agriculture Organization (fao) and the World Food Programme (wfp) have been called in the wake of a second consecutive drought in the south African nation. Zimbabwe's government has, however, made it clear that it will not accept any aid with "political strings attached".

"We realise that there are organisations bent on using aid to enhance interests of opposition parties in Zimbabwe. We are not going to allow this," agriculture minister Rugare Gumbo said in a media statement. "The government wants an independent assessment of food shortage from the two un bodies and then decide which aid agencies should be allowed to assist with food distribution," Gumbo said.

According to the Zimbabwean government's assessment, this year the country will produce a paltry 600,000 tonnes of its staple food maize, against an annual requirement of 2,400,000 tonnes.

The government has already imported substantial amounts of food from Malawi and South Africa. It is making more efforts to get food from other countries. But the country has no foreign currency to import food.

The price hike has come at a time when the country is facing the world's highest inflation at the rate of around 2,200 per cent.