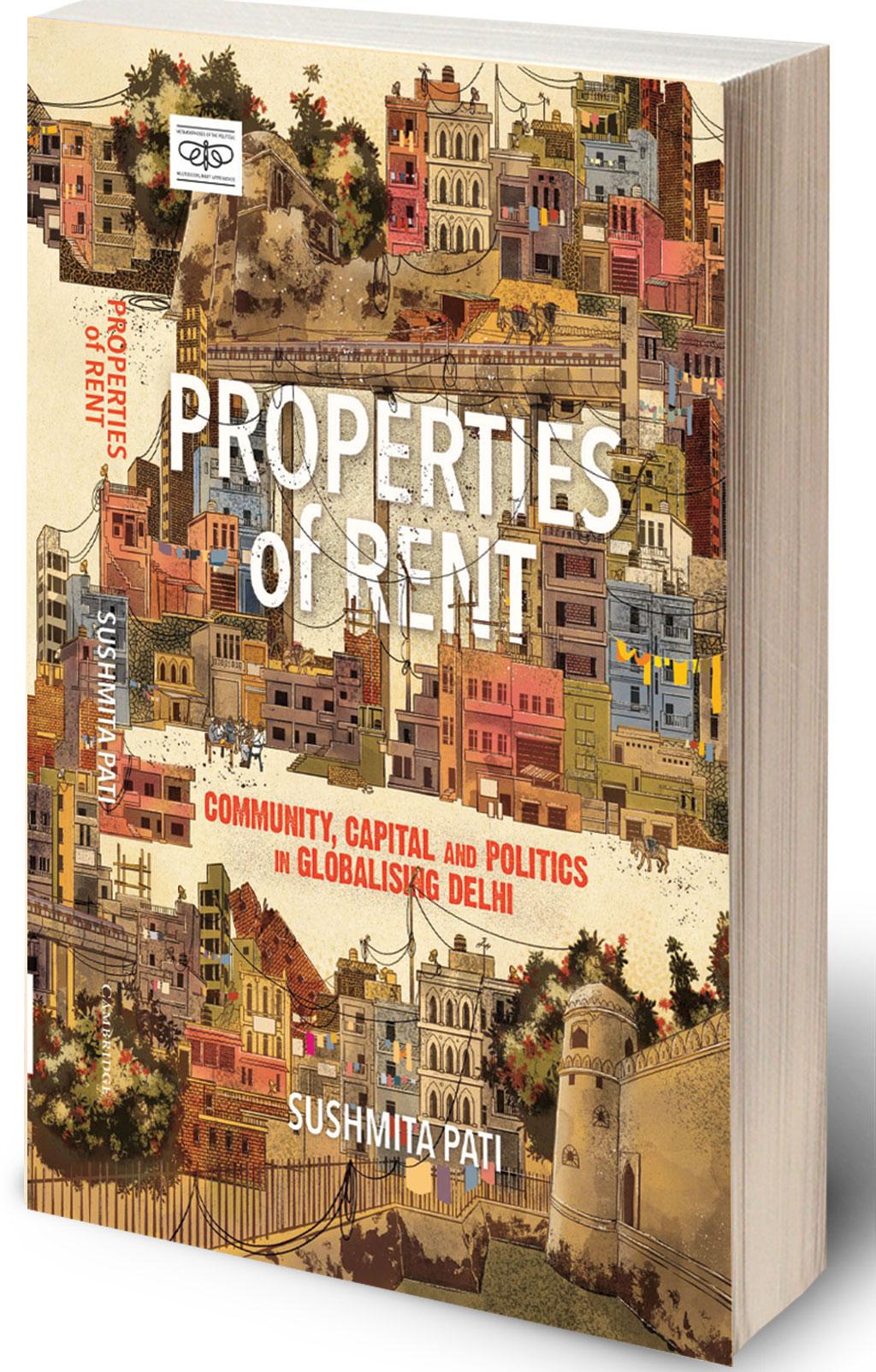 ‘Properties of Rent’ is about the tension between rapidly changing economic realities and parallel attempts by communities like Jats to hold on to kinship associations, as well as traditional notions of respect and honour

Have you ever wondered how rental markets, operating through bypassing municipal laws, maintain their durability in Indian cities? What shapes the landlord-renter relationship? How caste hierarchies continue to manifest themselves despite all the rhetoric of globalisation?

Sushmita Pati’s Properties of Rent sheds light on these via a detailed ethnographic investigation of the politics of rent in two urban villages of South Delhi —Munirka and Shahpur Jat.

The book is about the tension between rapidly changing economic realities and the parallel attempts by communities to hold on to kinship associations, as well as traditional notions of respect and honour. This tension has distinctly shaped the forms of accumulation that have evolved in spaces like urban villages. Known for farming in the northwestern region of India, the Jat community is dominant in both these villages. 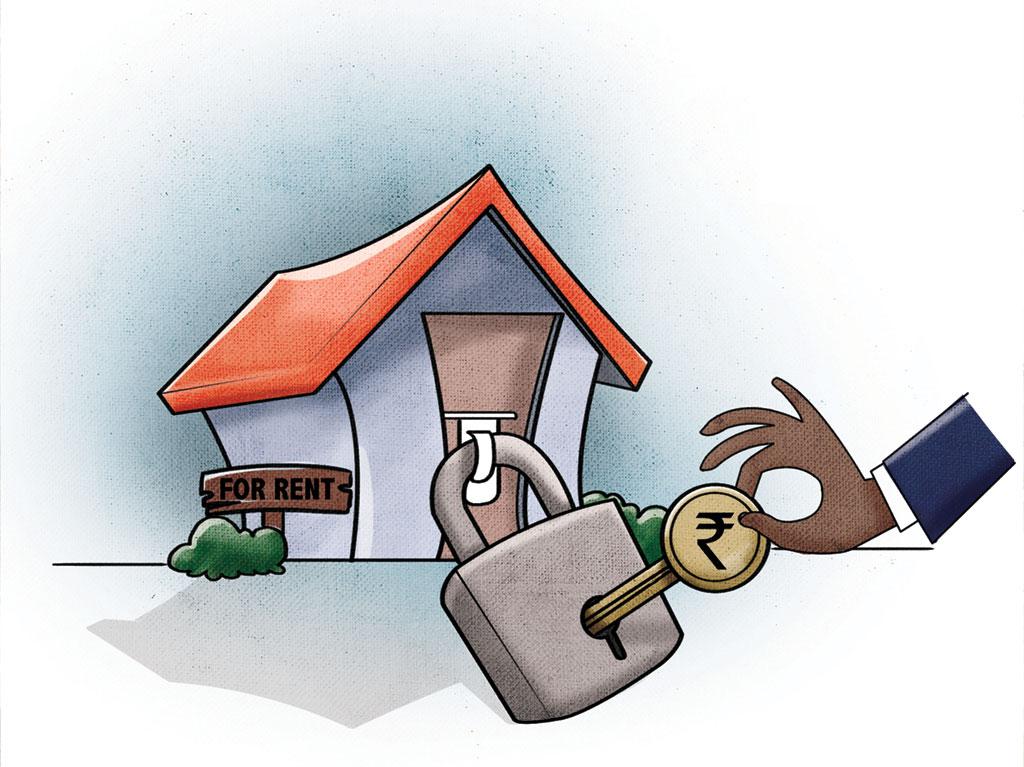 While presenting to her reader the post-liberalisation rental market controlled by Jats, Pati shows how global capital makes space for these messy, grey zones (in terms of law). The author has analysed how, in grey zones, rental economy operates in the shadows of global capital in ways that predate neo-liberalism.

The author’s central argument is that rent is not merely an economic and political category, but a lived one. Rent is about micro-processes of controlling resources, emotive expressions of belongingness, community, honour and channels to extract economic value.

The book is divided into seven chapters. The author starts by explaining the “game” being played between the government (which acquires land) and the landlords (who file court cases against the government for paying low compensation).

The Jats were able to halt land acquisition and enter the informal land and rental market, whereas the common land— called shamilat deh —was acquired by the government from the Dalits living there.

The Jat community could maintain land ownership by claiming to be sons of the soil and erecting sticks and staves to prove their claim, thereafter building colonies and markets and manipulating local offices.

Pati then delves into the history of Jats in Delhi from the 1960s onwards. How did they fall out of the construction sector and join the transport businesses in the 1980s? In the 1990s, even the transportation businesses failed, but there was a boom in real estate and financing.

Wealthy landowners rejected renting as a lowly business. Rent helped those who were never entrepreneurial and had petty government and police jobs. Jats who entered the informal market for rent shaped these villages anew, with renters from all over India residing there and forming little communities of their own. For example, Munirka hosts many renters from the northeastern regions of India.

Chapters three, four and five address the central research objective directly. They ask how the rejection of neo-liberal sensibilities allow local sensibilities to shape the rental economy, which, in turn, shapes the political, economic and lived experiences of people residing in urban villages.

Landlords regularly defy bylaws and regulations to maximise rental space. Provisions for demolishing informal structures have always been there but the government never applied them in villages dominated by the Jats for it could trigger anger and hate in them.

By the 1980s, the government started changing its policy towards non-tolerance of informalities in its cities to accept them to some degree for bringing them under government control.

Contrary to the government’s initiatives to formalise Delhi’s rental economy, Jats in urban villages have learnt the art of running a hard cash rental economy. Solidarity within the community helps it deal with the hard cash in close networks to maintain their dominance over the rental market.

Jat landlords could organise themselves into khap panchayats, kunbas (clan) and committees for negotiating with the state, making collective decisions at the level of the locality and managing the hierarchical order within the gentrified urban villages.

All these collectives are maintained by strict adherence to patriarchy, wherein women’s bodies are controlled to preserve “family” values. 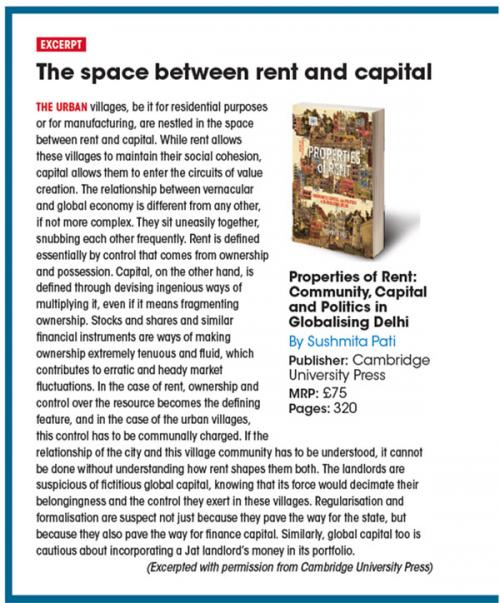 An older generation of Jat men who depend on the rental economy feel that even young Jat men are losing their cultural traits, identities and physical prowess.

This loss of Jat identity is blamed on the renters from different regions in India. Interactions between Jats and renters from the northeastern areas are covered extensively in the book.

Young Jat boys are joining vigilante groups working on the active maintenance of differences between landlords and renters regarding their cultural traits and moral norms.

The difference in culture gives rise to the politics of purity and pollution in urban villages, where the practices of renters are understood as pollution.

Pati argues that caste differences are used as an excuse to create insecurities of violence and non-tolerance of difference, in order to extract higher rent for security, tolerating alien cultural practices and ensuring non-interference by landlords.

In the sixth chapter, the author returns to talk about the Dalit community after she mentions them in the first chapter.

The author notes that many Jatavs and Balmikis, doing petty jobs for the government, could become landlords. However, the Dalit community could not stop the government from acquiring land from them, even their worship places — Buddha Vihars — were not secure.

In the attempt to cover the lives of all the communities who could become landlords in the selected two villages, the author did not locate the Dalit community and Buddha Vihars politically.

In the context of Dalit politics being at loggerheads with the ruling governments in post-British India, the sense of power that Balmikis and Jatavs got after becoming landlords and making a place for Buddha Vihars remains unanalysed in this book.

Secular politics denies the role of caste in present-day Indian society, whereas Hindutva politics is against Dalits converting to Buddhism.

At last, this book returns to the relevance of Jats in national politics, which is partly maintained by their control of the rental economy.

This is why the electoral politics in urban villages of Delhi is a moment of joy and despair among Jat candidates contesting against each other to become the leaders of the community.

They get party tickets to contest national elections from the money they make after winning local elections.

This book is primarily aimed at scholars of urban studies engaged in qualitative research. It is an accessible ethnographic account, written in easily understandable language.

Though it has an academic relevance in understanding the diverse functions of rent in the global capitalist economy, it lacks engagement with the changing urban policy-scape under the present regime.

There is no analysis of the new working-class hostels proposed by civil societies and think tanks for Delhi. Is the push for formal and organised working class hostels a viable solution to the racial and caste discrimination in the informal rental market?

What does the author have to say about the government strengthening the rights of the landlords over renters? While some important questions remain unanswered, this book does show us continuities in caste hierarchies and racial discrimination, coupled with colonial relations brought in by global capital, which affect the lives of migrants in Indian cities like Delhi.

(Amit Kumar is a doctoral candidate in Development Studies at the University of Bonn, Germany)

This was first published in the 1-15 September, 2022, edition of Down To Earth