In the mid-2000s Scot Carney was an anthropologist researching in southern India, when a fellow researcher died under mysterious circumstances while on a field trip to Varanasi. The death was pronounced a suicide. Carney spent three days over the mangled remains of his fellow researcher. “More than anything else, her death taught me that every corpse has a stakeholder. This was the beginning of my own understanding of the international market for human bodies,” he writes.

The experience jolted Carney to abandon academia for investigative journalism. In India, he found many examples of the ways human bodies become commodities. Carney describes this as the “red market”, a term encompassing the legal and illegal trade in human bones, blood, organs, embryos, surrogate pregnancy and living children. The Red Market: On the Trail of the World’s Organ Brokers, Bone Thieves, Blood Farmers, and Child Traffickers is the product of his investigations.

In one chapter, Carney describes his visit to a camp for tsunami victims in Chennai. Once called Tsunami Nagar, the camp is now called Kidneyvakkam because it is common for women there to sell their kidneys. “The women are just lined up...When the tsunami happened, organ brokers realized there were a lot of people in very desperate situations and they could turn a lot of quick cash by just convincing people to sell their kidneys.” Women were offered up to Rs 1 lakh for their organs, though they often got far less. Within a year, he notes, doctors from 52 Indian hospitals performed 2,000 illegal kidney operations—with recipients paying up to Rs 5 lakh per surgery. 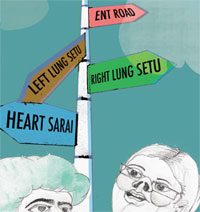 Carney travels to a high-end fertility clinic in Cyprus that recruits egg donors from a population of poor Eastern European immigrants. He interviews surrogate mothers in Gujarat confined to a clinic for the duration of their pregnancy and paid between US $5,000 and US $6,000—a terrific bargain by American standards, where surrogates are paid many times the rate.

According to Carney, the trade is a product of two major flaws in the medical establishment. Most countries do have laws prohibiting buying and selling of organs but do not prohibit anyone from billing for the services involved in transplanting organs. This provides doctors with a financial incentive to perform transplants, while the costs of the organ are absorbed into the larger transaction and easily hidden from view.

The second flaw is the practice of making organ donation anonymous. You can buy an organ without knowing where it came from, and it thus becomes mere tissues rather than part of a human being. Anonymity makes it easier for buyers and brokers to escape accountability for deaths and injuries to donors. Carney is less concerned about ethical issues around selling an organ than about exploitation of poor donors, whose circumstances push them into making desperate exchanges. Obscuring the source of the organ makes the poor donor more vulnerable to exploitation. “Every bag of blood should include the name of the original donor, every adopted child should have full access to his personal history, and every transplant recipient should know who gave him an organ,” he writes.

Radha Sengupta is a doctor in Bengaluru