Book>> Weeds, in defense of nature’s most unloved plants • by Richard Mabey • Harper Collins • US $25

They have extraordinary genetic pluck that enables them to take astonishing levels of abuse and rough treatment—the harder the better. Plantain likes to be trodden underfoot. Danish scurvy-grass thrives on turbulent motorways. Weeds can also bide their time until conditions suit their fancy: in the case of bindweed seeds, 40 years.

So it is a bit of a surprise to find weed lovers. Richard Mabey is one. In Weeds, In Defense of Nature’s Most Unloved Plants, Mabey combines scholarship with a witty writing style to remind us about the utility of weeds: they stabilise soil, curb water loss, provide shelter to other plants and repair landscapes shattered by landslides, flood and fire. Weeds have served as food, fuel, medicine and building material for insects, birds and humans. 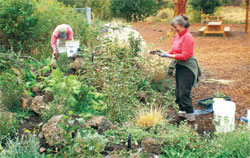 Mabey is one of our best known nature writers. He developed a fascination for weeds when he was in his 20s while working for a London publishing house in the industrial wastelands near Heathrow Airport. He would abandon his lunchtime desk and scrounge the neighbourhood, checking out weeds. He was seized with admiration for “vegetable guerrillas that had overcome the dereliction of the industrial age”. Buddleia from China, Indian balsam, Japanese knotweed —these were the new weeds on the block, several generations on from the weeds that, as his favourite 19th century poet John Clare put it, ended up “troubling the cornfields with destroying beauty”.

Mabey takes us to the cultural connotations of what it means to be weeds. The Romans regarded nettles so highly as pot-herb and medicine that when they invaded Britain they brought their own varieties. Ground elder was introduced into Britain as a remedy for gout. Rhododendrons remain beloved in India despite being a menace to woodlands. Weeds is strewn with literary invocations of wildness, from Shakespeare’s “bank whereon the wild thyme blows” to Clare’s greeting an April daisy (“Welcome, old matey!”). Gerard Manley Hopkins wrote: “Long live the weeds and the wilderness yet”. And Mabey’s ambiguous ode teaches us they will be around to inspire and unnerve us no matter how rigorous we are with the weed-killer and the hoe.

Mabey is not an unabashed lover of invasive species. His book is replete with horror stories of the ravages of non-native species upon fragile ecosystems. After World War II, bombed sites in the UK became so covered with plants that many claimed the Germans had dropped those seeds as well as bombs. The plant Rosebay Willowherb was called “bombweed” because it rapidly took over bomb craters. So invasive is the Kudzu vine in the US that a conspiracy theory has arisen alleging it is a Japanese plot to throttle the American economy. Globally, Europe has been a worse culprit than Asia, vast tracts of the US and Australia having vanished under weeds innocently introduced centuries ago. When it comes to fears of colonisation and migration, weeds are a metaphor for the porousness of geopolitical border.

Why do weeds travel so far? Mabey writes the methods are almost as varied as the plants themselves. Weeds have also been spread via the “sweepings from pet- food shops” and by ships dumping ballast. The now pan-global weed, Canadian fleabane arrived in Europe in the 17th century in the stuffing of a bird imported from North America.

The horror stories notwithstanding, Mabey does not denounce weeds for taking over hard worked agricultural land. He believes that most infestations may abate if people stop creating disturbances and let plant communities re-establish their own order.