On April 1, the small car that changed the way Indians drove stopped rolling out of showrooms in major cities in the country.

The Maruti Suzuki company stopped producing Maruti 800. In fact, Suzuki wanted to shelve the car way back in 1994 because of a royalty tussle with the government— the 60 per cent shareholder in the project.

The tussle to keep the 800 afloat is one of the more fascinating parts of The Maruti Story. On the driver’s seat on this bumpy ride is R C Bhargava, the co-author of this book. In The Maruti Story he talks about how the 1994 tiff raked up other issues. Maruti wanted to upgrade the 800 with a new, improved four-valve engine that Suzuki motors had developed.

The government nominees on the board, however, insisted the company must establish the performance of the new engine before it could be accepted, and that Maruti engineers should go to Japan, study the engine and report if it would perform in Indian conditions and be an improvement on the existing engine.

Though at the helm of affairs, Bhargava is self-effacing while describing how Maruti overcame the crisis that involved two governments at the Centre. Union ministers K Karunakaran and Murasoli Maran come in for praise.

But The Maruti Story is in large measure a story of Bhargava’s stint with Maruti. There is, of course, reason for such conflation. Maruti’s early history is closely aligned with Bhargava’s managerial acumen. Maruti started as a pet project of the automobile-obsessed Sanjay Gandhi.

The project lost its bearing when Indira Gandhi lost the general elections after the Emergency. But her return to power and Sanjay’s death appeared to have reignited the project as the prime minister became determined to make her son’s dream come true. 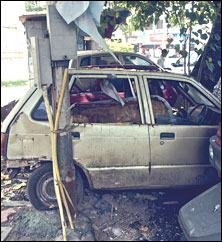 But things were tough with Indira Gandhi’s representative on the board, Arun Nehru, insisting the company must sell at least 100,000 units a year to be viable. This when the yearly car sales were barely 40,000.

The Maruti Story, at times, gets self-congratulatory in describing how the company achieved this target— Bhargava characteristically underplays his role. There are roadblocks from the government, but there are also cooperative ministers and bureaucrats.

There is little beyond the usual description of how an “affordable” small car became the middle class dream. The 800—it is right—was a status symbol and a social leveler: it was found parked outside corporate offices and in cramped neighbourhoods. The Maruti Story does show that by setting up a base of component suppliers, Maruti was able to ensure after sales services of the cars that broke down often—at least initially.

But there is nothing on how the demand was created in the first place. Surely Bhargava had a lot of say in the marketing policies. There is also very little on how the 800, given to frequent breakdowns, became a sturdier vehicle.

The Maruti Story is largely about the 800, though there is vignettes into production of the Gypsy, Omni, Zen, Baleno and Wagon R. Read it for an insider’s account of how the car had to navigate through political ideology and bureaucratic intransigence to become an icon.