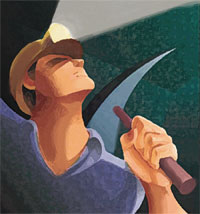 In Goa mines are closed. In Bellary, iron ore mines, once closed, have been opened on the condition that they will now follow a plan for environmental restoration and will not indulge in unseemly and distasteful activities. But the institutions for checking the reformed miners are still in disarray. They cannot monitor and enforce the rules. So, believe it or not, little will actually change in the Bellary landscape. The miners will flex muscles again (after a suitable wait) to extract more iron ore than they should; degrade the land and water; encroach on forestland; and cheat the exchequer by hiding the value of their exports. They did this once. They will do it again.

So are environmentalists to blame for the current economic crisis? Or is it that the rapid growth of the past few years is far beyond the capacity and ability of regulatory institutions to manage? If we don’t fix this, then let’s be clear, growth will happen again but will collapse faster than yesterday. It is not the environment that is to be blamed. It is the government.

The iron ore mines in Goa were closed after a government-instituted commission of enquiry charged the state with connivance in illegal mining. First the state government, then the Union Ministry of Environment and Forests (MoEF) and then the Supreme Court stepped in to close the mines. Now nobody knows how to reopen them as fast as they would like.

But open they will. And they must, given the fact that we need minerals. And nobody can say that extraction cannot happen in their backyard. The question is: how will Goa restart its mining operations so that the overburden is not dumped in forests and agricultural fields and does not destroy streams and livelihoods? How will it build infrastructure to transport the minerals without causing pollution and hazards? How will it contain the mining activity so that its cumulative impact is not unsustainable? In short, how will it mine so that there is a tomorrow?

It can do this only if there are working institutions that can be trusted to take carefully evaluated decisions. More importantly, the institutions should be able to enforce the conditions laid down at the time of clearance so that devastation is mitigated, if not managed well.

But we don’t have such institutions. Instead, there is a growing noise that environment and forest clearances are holding up growth. So, there is a frantic rush to clear everything in sight. But will this repair the economy? The fact is that clearances have never been the problem. In the past five years, MoEF has granted sanctions to so many thermal power stations, cement plants and iron-ore and coal mines that we should have doubled or tripled the capacity in most cases. But we have not because there are other unresolved issues—from finance to building projects against the will of communities.

If we are serious about doing something then this is where we should focus. First, we should invest in institutions that will provide oversight. This means doing what we mostly avoid—repair what is broken. Pollution control boards remain under-staffed, under-funded and abused by all. But we build new agencies, deluding ourselves that they will take care of all the troubles. The National Green Tribunal has been set up. Now this tribunal needs scientific information, monitoring data and assessment. It has nobody to call upon but the same defunct pollution control boards, so decision-making is seriously impaired. It is a joke.

Secondly, we should set straight the system of clearances. Currently, the entire structure is built on a few committees, manned (since there are very few women) by faceless and mostly retired bureaucrats and other sundry types. The institution is unaccountable. It is supposed to “assess” projects—spending on an average a few minutes on each file—and then take decisions. If the call is tough it will ask many questions of the project proponent. If the project is disputed and in the public gaze, it will ask even more questions and hold many more meetings. Finally, it will clear all the projects but with tough environmental conditions. This, when it knows that there is no monitoring mechanism to check even one of the 100 conditions it imposes.

This is what needs to be reformed, revamped and seriously improved. This will require taking tough positions on strengthening the existing system—bringing in more specialists and streamlining processes so that environment, forests, wildlife and coastal clearances are all brought together and assessed for cumulative impact. Most importantly, there have to be people to monitor post-clearance performance so that we can get development right and the environment safeguarded. We need to tighten enforcement. And we cannot do this without strong regulatory institutions.

But this is the music nobody wants to hear. The cacophony, “growth is dead, long live growth”, works best. It hides the real game that is afoot: the great Indian sale.

Reconstitution of EAC in the Industry Sector for Environmental Impact Assessment of projects requiring environmental clearance under EIA Notification, 2006