Time, whose side are you on?

As Texaco-Chevron drags its feet over remedial measures in Ecuador's once-pristine Amazon forest, those affected endure a difficult waiting game 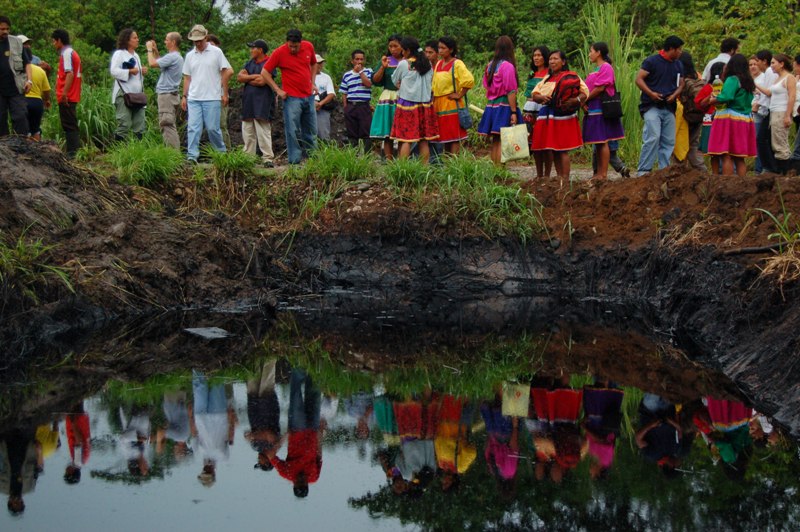 This blog was co-authored by Letty Fajardo, a human and environmental rights activist working with indigenous communities.

Two months into 2016, it is good to reflect on whose side time is on. We may fear it is on the side of the rich and powerful. For the disadvantageous parties, having a longer term plan and riding the storm out is more difficult. An example of this is the environmental devastation caused by Texaco-Chevron.

In the 1960s, Texaco developed oil fields in the pristine Amazon region of Ecuador. Over a period of 26 years, it used the crudest of extractive methods, even when better technology was available and used by Texaco elsewhere. It turned the paradise into a wasteland. Once the oil fields were no longer economically viable, 900 oil waste pits were dug, spoiling an area 450,000 ha. Oil and waste material, which was more than 30 times the amount from the Exxon-Valdez disaster, was discharged into the water bodies over two decades. It qualified as one of the worst oil disasters ever, carried out by people who were fully conscious of the repercussions. It caused irretrievable damage, but to what end?

The Amazon region of Ecuador was pristine yet inhabited. Around the time of the Texaco concession, some 30,000 people were living on these lands, now spoiled by oil waste. There used to be seven indigenous Indian groups in the Amazon. Two of these are now extinct due to contamination caused by the coming of Texaco. All indigenous groups are different, but share the philosophy that humans, nature and life form a sacred communion. They believe that land, water, soil and air have spirits and, hence, they respect them. “Those spirits give humans soul and energy,” they explain. “Wealth for us is not about money. For us, wealth is biodiversity, the wealth of nature. It cannot be commodified or valued.”

The impact of the pollution could not have been any larger. The destruction of the environment of their territory meant “a terrible harm directly to their soul and their ecological life”. They believed it was “a lack of respect by the company towards indigenous people”.

Then a remarkable thing happened. With the consent of all parties, a case was brought against the company to court in Ecuador. And justice prevailed. Texaco and its new owners Chevron were held liable for negligence and damages done and ordered to pay up and repair at a cost of US $9.5 billion. This was in 1993.

An endless game began. Chevron used its financial reserves to hold on, determined not to be answerable to the verdict. It withdrew all its assets from Ecuador so that they could not be confiscated, paying the government to do cosmetic “sweeping under the carpet” clean-ups. It also spent enormous amounts of money on private investigation and public relations (including commissioning a kiss-and-tell book) to taint its adversaries, triggering known forgotten legal procedures to cripple those fighting for justice. As if morality was on the side of the rich.

Some local organisations have done tremendous work to help—creating drinking water systems and new livelihoods—but the area remains as wasted as it had been for decades. Some victories have occurred—Chevron now has to pay up for the damage to Ecuadorian Amazon. The Union of People Affected by Texaco (UDAPT) has recently been encouraged by a very significant decision by the Supreme Court of Canada which allows it to sue Chevron in Canadian courts to enforce the $9.5-billion verdict of the Ecuadorian Court in 2011. It signifies a major breakthrough in its epic quest for justice sustained over the last 22 years. But not a single financial transfer has been made. The waiting game favours those who can afford to wait and not care.

So time, whose side are you on? Let you not be bought by those who can afford to waste you. We pray this year you will be on the side of those who bear no guilt and who need your help. Give them longer breaths, give them resilience and let 2016 be a year of priorities.