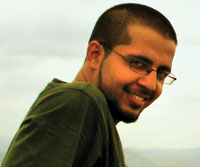 It was March 2013. We were on a field trip surveying wild carnivores. As we walked along a flank of the Tillari reservoir, my companion pointed at a large “scrape” (a patch of jungle floor recently cleared by an animal’s hind paws) along the forest trail and asked if it belonged to a tiger. It did look like a tiger’s scrape. I was excited. Two steps ahead we saw a large lump of tiger scat. “This is a big tiger,” I told my companion. He shook his head in agreement.

After taking photographs and noting the evidence on my datasheet, we carried on along the mountain. Another kilometre and we found another scat, slightly smaller, but distinctively like that of a tiger. “Could it be that of a female or a cub?” my companion asked. I wasn’t sure, so did not comment but took photographs. Tigers were known to exist in the area we were surveying and here was evidence.

The next day we went to Kendre in the catchment area of Tillari dam, where once a village existed before it was relocated to make way for the dam. We reached the site after an hour’s ride in a boat arranged by the forest department. We reached the tail-end of the reservoir. The minute we got off, we saw a very large tiger pug mark, probably that of a male. Close to it was a smaller pug mark, perhaps that of a female or young male.

I was ecstatic and could not believe the overwhelming evidence of tigers in the area. The forester who accompanied us said that on an earlier visit he and his colleagues had found a tiger pug mark and seen an elephant with large tusks from a boat. Interestingly, all these areas in Dodamarg taluka in Maharashtra’s Sindhudurg district are either reserve forests or private lands. They are not part of a protected area. 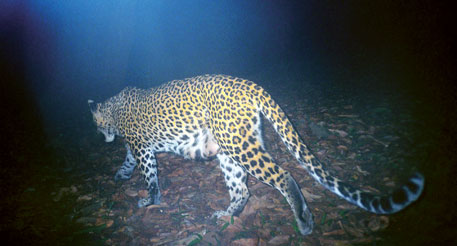 The region is connected to the Mhadei wildlife sanctuary in Goa, where the forest department recently acquired a camera-trap image of a tiger. A tiger cub was also captured from Vazare village in Dodamarg in 2001. These areas are also connected through forests of Talawade and Kankumbi to the newly formed Bhimgad sanctuary in Karnataka. With such potential for tigers, elephants and other wildlife, one would think the area around Tillari-Chandgad in southern Maharashtra should be a wildlife sanctuary or at least a conservation or community reserve. But the government thinks differently. It wants to raise rubber plantations and dig mines in these areas. The rubber mania in Sindhudurg district has reached unprecedented levels. Much of the land, which is either forested or has cashew plantations—these belong to private land holders or village communities—has been purchased by rich businesspersons from Kerala, and entire mountainsides have been covered by rubber monoculture. A case in point is a massive, 720-hectare rubber plantation by a company in Shirange-Mangeli, which lies at the heart of tiger habitat. This region was forest at one point of time. These private rubber estates are surrounded by wires and nets or electric-fenced, acting as a hindrance to the region’s wildlife. 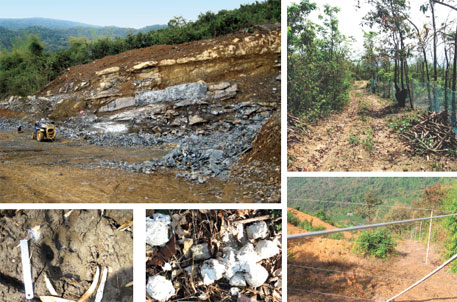 Another sinister trend in the district is the sale of large land-holdings near dams for rubber plantations. Rubber is known to be a water-intensive crop, so lands next to dams are best spots to grow it. The loss of forest in the catchments of these dams due to rubber plantations causes massive soil erosion, leading to rapid siltation reducing water storage capacity. But the government seems happy to give land to businesspeople. A website of a rubber company states, “Rubber Board (the Central government agency to promote rubber plantations) grants subsidy of Rs 30,000/ and Maharashtra state government has allocated Rs 15,000 as incentive to farmers for promoting rubber plantations in the area. Furthermore Rs 4,000 is apportioned for fencing of plantation by Government.” The people in the area subsist on cashew and mango plantations, but most of these land holdings are never fenced. Not many people in Sindhudurg understand how rubber can be grown, and therefore hardly any plantations are owned by local people. Why does the government want to promote rubber then? The plantations are totally owned, controlled and managed by businesspersons from other areas. In fact, even a majority of the labour force in these large rubber estates is from Kerala.

In nearby Kolhapur district, Hindalco is planing a bauxite mine in a reserve forest. The summary environment impact assessment (EIA) report of the project claims no tigers are found in the region. But it does say that three other Schedule I species—gaur, mouse deer and sloth bear—are found in the area earmarked for the mine. The EIA recognises loss of habitat and disturbance to wildlife and ecology of the region if the mine are allowed, but then concludes that the project will bring about “sustainable” development of the region. What exactly is sustainable development?

The Tillari-Chandgad area is part of a tiger corridor connecting the Dandeli-Anshi tiger reserve to the Radhanagri wildlife sanctuary. Sambars, Asiatic wild dogs, leopards and even tigers are known to roam some of the cashew plantations interspersed among forests. Hornbills nest in community forests, and otters use streams that meander through village and private lands.

This is sustainability, not blasting mines or clear-felling and fencing land for rubber.

The area around Tillari-Chandgad needs to be declared a community or a conservation reserve, where the right to life of wild animals and local people are established. It should not be the preserve of businesspeople and mineral- hungry industrialists.

Girish Punjabi is associated with Researchers for Wildlife Conservation and Wildlife Research & Conservation Society. He is interested in carnivores and their role in nature conservation. This work was supported by Centre for Wildlife Studies in Bengaluru

Dossier of the proposed iron ore mining in the Sawantwadi -Dodamarg stretch of the Sindhudurg Dist, Maharashtra, India